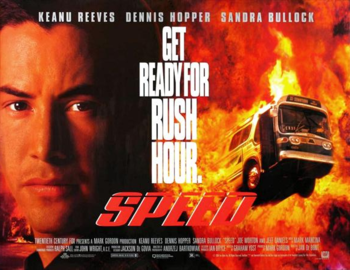 Whoa.
"Pop quiz, hotshot. There's a bomb on a bus. Once the bus goes 50 miles an hour, the bomb is armed. If it drops below 50, it blows up. What do you do? What do you do?"
Advertisement:

Keanu Reeves plays Jack Traven, a police officer in pursuit of Mad Bomber Howard Payne (Dennis Hopper). As this 1994 film opens, Payne has blown the cables off a packed elevator car, and threatens to blow the emergency brakes unless he gets a ransom. Jack foils the scheme, but Payne escapes by faking his own suicide. A few weeks later, Jack's bus driver friend boards his bus to start his daily route, and it promptly explodes. A nearby pay phone starts ringing, Jack answers the phone, and discovers the caller is Payne. The first bombing was just to get Jack's attention; there's another bus with a bomb on it, and the same fate will befall those aboard if he doesn't get his original ransom.

Caught in the middle is Annie Porter (Sandra Bullock in her Star-Making Role) as a passenger/hostage/love interest on the bus. Payne has, as the quote above indicates, placed a bomb on the bus she's riding. If the bus drops below 50... well, you get the idea. So, the bus must careen wildly through a city notorious for its traffic congestion, and if anyone attempts to leave the bus (under their own power or otherwise)... boom.

One final complication: When Jack gets on the bus and announces he's a cop, there's a street gangster on board who wrongly assumes Jack's after him and draws a gun. The gun goes off, wounding the bus driver. It's then up to Annie to take the wheel and keep the bus above 50 mph. Good thing she's a skilled driver... No, wait, she's a horrendous driver with a revoked license.

Noted for being very tense (Jack has to first board the bus before he can warn the passengers, which nearly causes the very explosion he's attempting to prevent), its sharp, witty dialogue (Written in large part by an uncredited Joss Whedon), and patently ridiculous yet exciting plot points and setpieces (at one point, the bus jumps a 50 foot gap in the road) which all helped contribute to its reputation as one of the best action films of the 90's. Also has a lesser-known sequel, Speed 2: Cruise Control (1997), which again starred Sandra Bullock (this time in the primary role), and was widely panned for being very derivative of the original (re: bomb, vehicle, frazzled brunette, attractive love interest, etc.). A Speed 3 also exists.......as a Father Ted episode with the bomb being on a milkfloat.

After a dye pack destroys his money, Howard Payne goes from joking and collected to barely coherent.

After a dye pack destroys his money, Howard Payne goes from joking and collected to barely coherent.