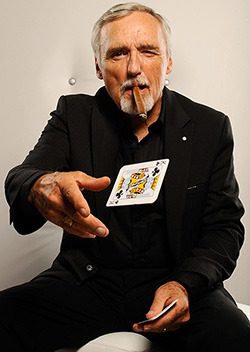 "I decided when I was very young, when I first saw movies, that I wanted to be an actor."
Advertisement:

Born in Dodge City, Kansas, Hopper began his career in bit parts on various television shows and had small roles in the James Dean films Rebel Without a Cause and Giant, however Hopper made his breakout role in Easy Rider, which he also directed. He was then able to spin this initial success into long and prosperous career in Hollywood.

His career was punctuated by a lengthy history of drug abuse, which he finally overcame in 1983, and troubled relationships with women (one of his wives divorced him after one week of marriage). Hopper was also infamous for playing King 'Bowser' Koopa in the critically panned Super Mario Bros: The Movie, a career move Hopper credited with ruining his career.

He had a cameo on Demon Days by Gorillaz where he read the story during "Fire Coming Out Of The Monkey's Head".

Hopper passed away from prostate cancer on May 29th 2010, 12 days after his 74th birthday.