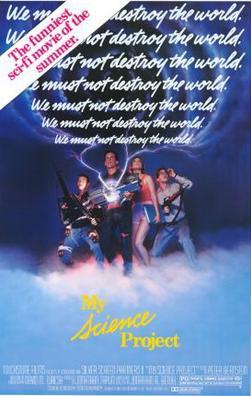 Teenage gearhead Michael Harlan (John Stockwell) has two weeks to turn in a science project he hasn't even started, or he won't graduate high school. He and his date Ellie Sawyer (Danielle Von Zerneck) break into a government aircraft boneyard looking for some machinery he can restore and use as his project. He takes a mysterious device that resembles a plasma globe attached to some other equipment. In auto shop the next day, he and his TV-obsessed friend Vince Latello (Fisher Stevens) discover that the device is a time machine, capable of creating a time warp where things from different time periods can interact.

My Science Project contains examples of: