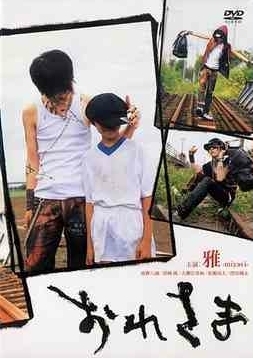 Sensational rock star Miyavi Ishihara is a major superstar in his home country of Japan. A prominent player in the thriving Visual Kei underground scene, he can barely walk out of his apartment in Tokyo without being mobbed by adoring fans, playing sold out venues night after night. This is the life he wanted, the life he left his little home in Osaka City when he was seventeen to live. But a life in the limelight can get exhausting, and he’d be lying if he didn’t say there were times where he missed home. So one night, he decides to get into the car and go to Osaka for a visit, and falls asleep on the way.

Except when he wakes up, he’s no longer in the car. He’s stranded on the train tracks in last night’s clothing, and his hometown looks decidedly unfamiliar. He doesn’t recognize the locals, and can’t figure out why they don’t recognize him, or why they’re all wearing outdated clothes. Things get weirder and weirder, until he realizes with a sinking feeling…

So what’s a famous musician stuck backward in time to do? Start a band, of course!

Oresama (Japanese: おれさま) is the 2004 wacky semi-autobiographical film of Japanese musician and actor Miyavi, and his first starring role in any sort of film.

Not to be confused with this manga, which has Oresama in the name.