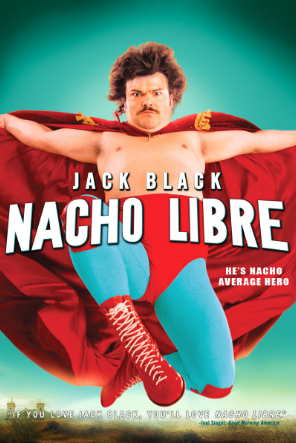 Nacho Libre is a 2006 comedy movie starring Jack Black loosely based on the true story of Fray Tormenta, a Mexican priest who secretly fought as a masked wrestler to support his orphanage (Tormenta himself was inspired to do this by wrestling movies.)
Advertisement:

The movie features Black as Brother Ignacio, a monk who cooks at a poor children's orphanage. Having always dreamed of being a wrestler (and wanting to gain money to help feed the orphans) Ignacio assumes the Secret Identity of the luchador Nacho, teaming up with a skinny man named Steven who goes by the stage name of Esqueleto (Skeleton).