Film / Yours, Mine, and Ours 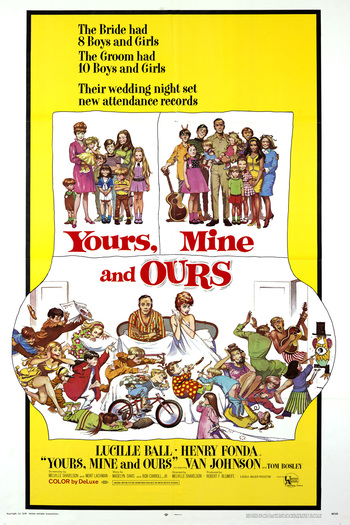 Frank has 10 children and Helen has 8 children, but now the chaos will never be the same.
Advertisement:

Yours, Mine, and Ours is a 1968 comedy directed by Melville Shavelson, starring Lucille Ball and Henry Fonda.

Frank Beardsley (Fonda) is a U.S. Navy warrant officer, recently detached from the aircraft carrier USS Enterprise and assigned as lead project officer for the Fresnel lens glide-slope indicator, or "meatball" (which would eventually become standard equipment on all carriers). Helen North (Ball) is a nurse working in the dispensary at the California naval base to which Frank is assigned. Frank meets Helen, first by chance in the commissary on the Navy base and again when Frank brings his distraught teen-age daughter for treatment at the dispensary. They immediately hit it off and go on a date, all the while shying away from admitting their respective secrets: Frank has ten children and Helen has eight, from their respective deceased spouses. The rest of the film follows their struggle to make their relationship (and subsequent marriage) work with that many children to consider, and how to keep such a large blended family functioning harmoniously.

Helen and Frank Beardsley were in fact real people. The former wrote a book, Who Gets the Drumstick?, about their blended family's experiences, which formed the basis for the film — though Desilu Studios bought the rights to their story long before the book was published.

In 2005, a remake was released starring Dennis Quaid and Rene Russo as the parents. This remake was a joint production of Paramount and Metro-Goldwyn-Mayer (with additional involvement from Columbia Pictures after parent Sony bought a minority stake in MGM which has since been divested), a result of Paramount assuming the copyright to the film upon absorbing Desilu, and the original distributor of the 1968 film, United Artists being bought by MGM in 1981 (MGM retains full distribution rights to the 1968 film to this day despite Paramount being the copyright holder).

Yours, Mine, and Ours provides examples of: