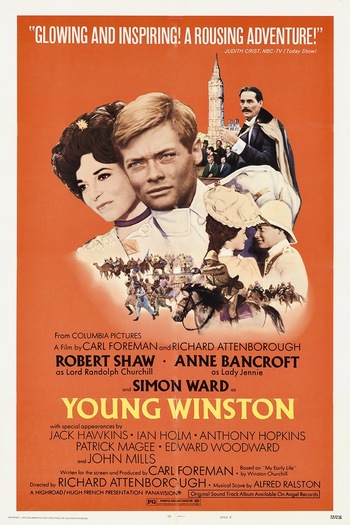 A young man in a hurry.
Advertisement:

1972 Biopic of Winston Churchill, directed by Richard Attenborough and starring Simon Ward as Winston himself, Robert Shaw and Anne Bancroft as his parents Randolph and Jennie Churchill, and an All-Star Cast as various other figures in Churchill's life.

The film focuses on Churchill's early life as a boy, and later as a young cavalry officer in India, Sudan, and the Second Boer War, culminating with his election as a Conservative Member of Parliament in 1900. Based on his 1930 memoir My Early Life, it is very much shown from Churchill's own perspective as a slightly older man (Simon Ward also narrates the film, using a version of Churchill's distinctive older-man voice). Attenborough occasionally uses the device of offscreen interviewers to get a bit more out of his subjects, but basically, this is the story of Churchill's early career as he himself would have liked it to be told.

The film is notable for its 157-minute length (it has an Intermission halfway through) and its aforementioned all-star cast, which includes such actors as Anthony Hopkins, as Churchill's friend and rival David Lloyd George; Patrick Magee, as his army commander Sir Bindon Blood; Edward Woodward, as his former army colleague Aylmer Haldane; Ian Holm, as the editor of the Times; John Mills, as Lord Kitchener; and Robert Hardy, as the headmaster of Churchill's first prep school. (Hardy would go on to play Churchill himself on several occasions, most famously in the 1981 miniseries Winston Churchill: The Wilderness Years.)