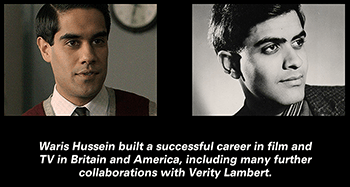 Biopics, works that are Based on a True Story and fiction that feature dramatized depictions of real people as prominent characters will sometimes show video footage or photographs of the real person portrayed during the Closing Credits or a "Where Are They Now?" Epilogue. The purpose is usually to remind the audience that the person actually existed, allowing them to compare who they just saw to Real Life.

Compare Real Person Cameo where the real person is having a bit part in the work itself.