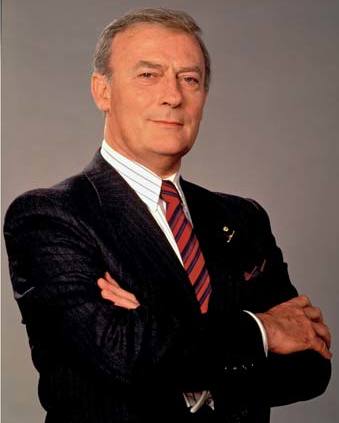 Edward Albert Arthur Woodward OBE (1 June 1930 — 16 November 2009) was a well regarded British actor who is best known for three iconic roles - the title role in the dark and cynical British spy series Callan, Police Sergeant Howie in The Wicker Man and Robert McCall in the US series The Equalizer. He's also known for his film roles in Breaker Morant, and Hot Fuzz. Received the Affectionate Nickname "Ewar Woowar" from no less than Judi Dench (reportedly from a theatre marquee where they had run out of 'D's and couldn't bill him correctly) and is fondly remembered by nearly everyone who worked with him. His son, Peter Woodward, is also an actor; the two worked together in an episode of Crusade.

Woodward is said to have taken part in over 2,000 television productions. His own estimate was over 3,000. And he came up with this estimate in 1987.

Woodward won a Golden Globe Award for The Equalizer in '87. He was nominated for an Emmy for each season the series was broadcast. He won a News and Documentary Emmy in 1989 for his work on the documentary, Remembering World War II.

Not to be confused with Ed Woodward, Manchester United's executive vice-chairman.

Television (regular and recurring roles only)