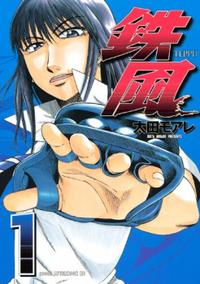 "I can't stand people who have it all!"
Advertisement:

Natsuo Ishidou is so amazingly awesome it's a burden. She can beat anyone in any sport, effortlessly, but in doing so drives everyone away, and so she is desperately lonely.

Actually she's just a sadistic bitch of a high-school girl. When she finally meets someone, Yuzuko Mawatari, who's much better at her in a sport she can't effortlessly excel at, Mixed Martial Arts, and who is happy and well-balanced, she makes it her mission in life to run Yuzuko into the ground.

A Seinen manga series written by Oota Moare, serialized in a small magazine Good! Afternoon. It ran for 32 chapters from 2008 to 2015. It has a lot in common with Airmaster, which also features a tall schoolgirl who excels at sports as the main character and largely avoids fanservice, although Maki is much less a sadistic bitch and more a Shrinking Violet. Also, Teppu is very realistic, while Airmaster... isn't.

Teppu can be best thought of as an inverted Shounen manga with the Stock Shōnen Rival as its protagonist rather than the Stock Shōnen Hero. Natsuo, instead of being a happy and well-balanced young male, is an easily irritated and arrogant young female. Instead of starting off relatively weak and working her way up, Natsuo is already one of the best; Yuzuko is her first real challenge in ages. Instead of losing her first fight and learning some lesson about hard work, she wins it handily, through a cheap tactic. Really, Natsuo acts as an antagonist to Yuzuko, having all the characteristics The Rival would have in a regular Shounen work. The best part is that this is all lampshaded by various characters, often Natsuo, who sees the whole situation as irritating, though also accepts being a Villain Protagonist rather easily.