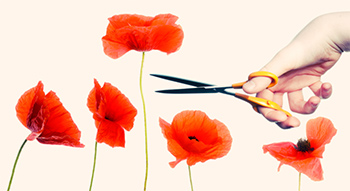 See what happens when you overachieve?
"All our best men are laughed at in this nightmare land."
— Jack Kerouac
Advertisement:

Named from the phrase "the tall poppy gets cut down," an aphorism used throughout much of The Commonwealth of Nations to describe resentment of those whose accomplishments elevate them in prominence above their erstwhile peers. Tall Poppy Syndrome is in play when a character or characters act to achieve parity with another character who is presented or perceived as somehow "better," not by improving themselves but by bringing the other guy down to their level.

Common in social ghettos and other places where institutionalized categorism (e.g. racism) results in aggressive and internalized categorism, with people of a certain category (e.g. race, ethnicity, class, caste, gender, sexual orientation, species, mutant, etc.) believing — even on a subconscious level — that they are inferior and should act in a certain way, and hence pull down and demean anyone who manages to (or even aspires to) act differently, rise to greatness, or escape the social ghetto.

The term comes from a story about Tarquin the Proud, last king of ancient Rome. Tarquin's son Sextus had captured a city, and asked his father how he should proceed to rule the place. Rather than reply, Tarquin drew his sword and sliced the heads off the tallest poppies in his garden. Sextus took this to mean the most prominent men should be put to death, so he had the local leaders rounded up and executed. The idea, however, is even older: Herodotus describes Thrasybulus, the tyrant of Miletus, doing the same thing in a grain field as advice to Periander, who had just seized power in Corinth.

Though the wording remained the same, over time the expression gradually evolved to mean it was bad to stand out in general, and not just because some power-hungry dictator might kill you. The idea became that one shouldn't think they're better than their peers just because they've accomplished something. In practice, this can run the gamut from being generally good advice warning against arrogance, to toxically tearing down other people's accomplishments simply out of resentment.

This attitude is present to a greater or lesser degree in many of the world's cultures, to the extent it could be considered a generally human trait, and is particularly prevalent in collectivist and hierarchical societies. Examples include the Japanese proverb Deru kugi wa utareru — "The nail that sticks out gets hammered down," which not only refers to success or ambition, but to anyone who fails to conform to uniform standards; this proverb was imported into English as a calque, sometimes with the additional adjective "the proud nail." There's the Scandinavian concept of the "Jantelov" ("the Law of Jante"; see in Literature below); the Philippine and Mexican Crab Mentality or "Crab Bucket Syndrome," based on the myth that if you have a bucket of crabs, you don't need to have a lid because any crab that tries to climb out will be pulled back down by the others; the Dutch proverb boven het maaiveld uitsteken, meaning, "Standing above the level at which the field is mowed." In Chinese, "The tall bird must be shot at." In Korean, "An angular stone is bound to be chiselled." A Russian proverb is, "Вот радость — у соседа корова сдохла" (Vot radost' — u soseda korova sdokhla "What joy: the neighbor's cow has died"), although that is more akin to the phrase, "Misery loves company," - collective misery being more prized than individual happiness.

In politics, Tall Poppy Syndrome is a form of hypocrisy that values loyalty over ability as a person of meritocratic standing is considered a liability if their allegiance is to a different state or ideology.

It's one of the reasons for someone to engage in Obfuscating Stupidity, Obfuscating Disability, or Deliberate Under-Performance.

It is not related to Tallpoppy of ShadowClan.

Compare Do Well, But Not Perfect; The Complainer Is Always Wrong; and Too Qualified to Apply. A common Freudian Excuse for The Un-Favourite. Contrast Social Darwinism (which is about those on top making it harder for those at the bottom to climb up, rather than those below acting to bring down those who try to rise), Bullying a Dragon (where trying to hammer down those clearly superior to you in magnitudes result in catastrophic consequences) and Beware the Superman (where the short poppies are right to cut the tall down). The Paragon actively tries to avoid this trope by bringing others up to his or her level, rather than letting them push him or her down. Contrast also the American aphorism "the squeaky wheel gets the grease." See also Ambition Is Evil; Enemy Mine; It's Popular, Now It Sucks!; and Enemies Equals Greatness (where having enemies is a status symbol of some kind). This is one of The Perils of Being the Best.