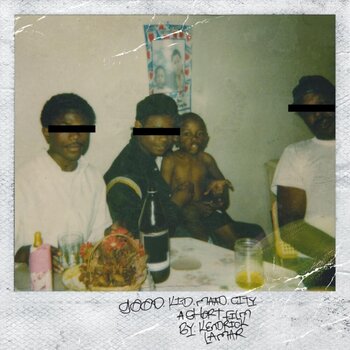 good kid, m.A.A.d city is the second studio album and major-label debut of American rapper Kendrick Lamar. Billed as a "short film", the album plays as a fictionalized narrative about Lamar's teenage experiences in Compton, California, deconstructing Gangsta Rap by featuring a Darker and Edgier vision of teenage gang life.

The young Lamar - referred to as K-dot - isn't such a "good kid" when he's "with the homies"; he claims to believe in sobriety and nonviolence but discards both in their presence, barely evading arrest and suffering through bad drug trips as a result. Distracted by sexual fantasies, K-dot impulsively drives into the wrong neighborhood alone to hook up with Love Interest Sherane. Two blocks from her home, Lamar is instead intercepted by members of a rival gang who predictably beat him senseless for his trouble.

Tired of Running, Lamar's friends get into a shootout to avenge him and drive off the other gang members at the cost of one of their own, seemingly ensuring a Cycle of Revenge. Encouraged by family and religious figures not to continue down this path, K-dot is implied to find religion and grows into a successful rap artist.

good kid, m.A.A.d city released to near-unanimous critical acclaim with many readily declaring it an instant classic. Lamar himself was somewhat cooler, calling his work "classic-worthy" but claiming it still needed to pass the test of time to be considered a true classic. The album has an average critical score of 91 on Metacritic and also debuted at #2 on the Billboard 200, netting the highest first-week sales of any male rapper in 2012.

The album also controversially lost several of its five Grammy Award nominations, including Best Rap Album and Best Rap Performance, to Macklemore (for his album The Heist and his song "Thrift Shop", respectively). The confusion from these decisions was on such a massive scale that Macklemore personally apologized via text to Lamar after the award ceremony.