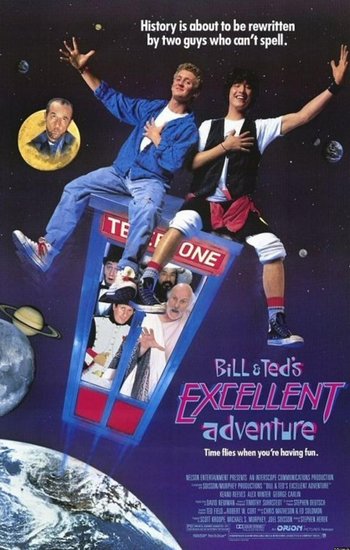 The first Bill & Ted film features Bill S. Preston, Esq. (Alex Winter) and Ted "Theodore" Logan (Keanu Reeves) as two air-headed rocker kids from San Dimas, California. They're so focused on their wannabe rock band Wyld Stallyns, not to mention so stupid, that they're in danger of failing History class and being held back. To make matters worse, Ted's authoritarian police chief father says that if that happens, Ted will be shipped off to a military academy in Alaska, breaking up the band.

Things look bleak for the two until help literally drops from the sky. The time traveler Rufus (George Carlin) lives in a utopian future built upon the peace-bringing philosophies popularized by the music that these two good-natured dunderheads will eventually create. Rufus offers them the use of his time machine — disguised as an ordinary phone booth — so they can do the research needed to create a History project that will let them scrape by with a D. When a brief trip to France causes Napoleon to follow them back to the present, Bill and Ted decide to stage the ultimate oral report by getting the historical figures themselves to present it. Their carefree jaunt through time gives them the passing grade they need to stay together... and the mental focus they need to create the music that will produce the philosophy that will lead to the future that... well, you get the idea.

Bill and Ted's Excellent Adventure demonstrates these most triumphant tropes:

Dude, you made it through the first film's tropes! Excellent!