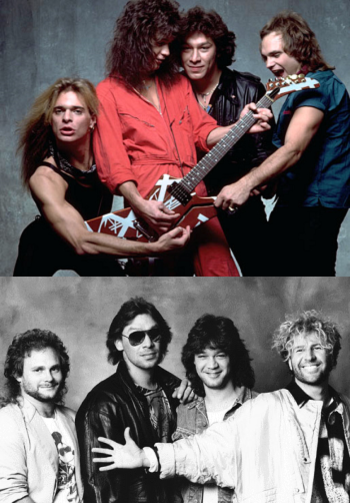 If The Rolling Stones had Eddie Van Halen as their guitarist and a hyperactive, insane combination of Freddie Mercury and Ronnie James Dio as their frontman (David Lee Roth). And Eddie's brother on drums. And the bassist. Probably the most fun Hard Rock band you'll ever hear. They even got their own Guitar Hero game!

Van Halen began their path towards super-fun rocking in Pasadena in 1972, with its initial lineup containing the Van Halen brothers (Eddie on guitar and backing vocals, Alex on drums), David Lee Roth on vocals, and Mark Stone on bass. Stone was thrown out in 1974 and the band's "classic lineup" took shape, with the Van Halens, Roth, and Michael Anthony on bass and backing vocals.

After being seen by two Warner (Bros.) Records executives at a concert, the band got a contract with WB and started working on its debut album. Produced by Ted Templeman (who stayed with the band for its first six albums), Van Halen became a smash success thanks to the combination of Eddie's hyperactive, lightning-fast fretwork and Dave's flamboyant, Large Hammy Ace persona. It contained a few classic songs, such as the band's headbanging cover of "You Really Got Me" by The Kinks, the Image Song "Runnin' with the Devil" and Eddie's mindblowing solo "Eruption". They toured nearly a year in support of the album, notably opening for Black Sabbath and completely blowing them out of the water in a time when Sabbath was going through their first Dork Age. While rock music itself was in a Dork Age at a time when disco was still dominant (if you believe the old narrative), Van Halen is seen as one of the bands that stopped it from collapsing under its own weight (along with, you guessed it, Punk Rock, natch)note you could even say they co-opted Punk Rock, thus preventing the genre from taking over the mainstream (at least for a time).

Van Halen quickly made a followup, the aptly-titled Van Halen II, which was another success and gave the band its first hit, "Dance the Night Away". Women and Children First also followed a year later, containing more kick-arse hard rock but also showing Eddie's first and most definitely not last use of keyboards on a VH album (on "And the Cradle Will Rock...").

Tensions started rising around the time of Fair Warning between Eddie, who wanted to write more serious and complex stuff, and Roth, who didn't have the patience for this and wanted to carry on with the fun rocking. Combined with cocaine and alcohol abuse on Eddie's behalf, Warning was a Darker and Edgier album that was much less fun than the previous three and, unsurprisingly, was met with much less commercial success, though it did get good reviews and spawned a hit with "Unchained". They rebounded with the cover-heavy Diver Down a short while later, which had hits such as "Oh, Pretty Woman" and "Dancing in the Street."

Van Halen hit their indisputable peak with 1984. Their highest-selling and most critically acclaimed album, 1984 saw the band reconcile their anthemic rock with Eddie's love of keyboards, and gave them their most enduring hits: the keyboard-powered "Jump", the hyper-speed hilarity of "Hot for Teacher" and the Epic Riff-driven "Panama". As a testament to how good it was, 1984 was only kept off the #1 position in the US because of Thrillernote coincidentally enough, Eddie also made a cameo appearance on Thriller, playing the solo on "Beat It".

Roth left Van Halen on April 1, 1985, replaced by former Montrose vocalist Sammy Hagar. Drastic changes took place: Templeman left along with Roth, their logo was slightly changed (the lines extending from the "VH" letters now formed a sphere) and their sound changed. While 5150 retained some of the party rock sound they had become famous for ("Summer Nights", "Get Up"), Van Hagar slowly drifted away from fast, rockin' fun and became a mainstream pop-rock band with lots of keyboards and Power Ballads. (A smart move, since this was when Hair Metal was really hitting its stride.)

Hagar left the band in 1996. After a temporary reunion with Roth, Gary Cherone from Extreme (and "More than Words" infamy) was recruited as their new frontman. The resulting album, Van Halen III, was panned by everybody, earning this short-lived era the nickname of "Van Horrible." After a hiatus, a second tenure with Hagar, and a complicated situation, Anthony was replaced by Eddie's teenaged son Wolfgang. Roth returned in 2007, and the band released what would be their final album, A Different Kind of Truth, in February 2012. In what may strike fans as a bit of déjà vu, Truth ended up peaking at #2 on the charts, kept off the #1 spot by 21. (No guest spot for Eddie this time, though.)

A few years after leaving the band, Hagar and Anthony formed Chickenfoot with Joe Satriani and Chad Smith.

On October 6, 2020, Eddie Van Halen died after a long battle with cancer; Wolfgang confirmed a month later the band, for the time being, called it quits. The following year, Mammoth WVH, Wolf's side project, released their self-titled debut album to critical and commercial acclaim, keeping the Van Halen name alive in the media as well as with rock fans.

Everybody Wants Tropes!! We Got Some, Too!!