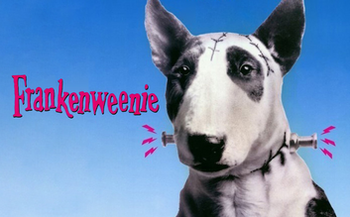 The trope of using "Franken-" as a prefix to any other word, to indicate an unnatural abomination of the same. Particularly (but not always) one that involves re-animation of dead X, recycling of body parts from dead X, or combining parts of X and Y in a way that is considered wrong. May imply Science Is Bad. Less common is naming the character "X-stein," but it has been known to happen.

Some blame the creators of the work for not realizing that Frankenstein is the name of the creator/scientist who created the monster, said monster's not having a name (but saying once "I ought to be thy Adam")note Though since he was created by Frankenstein and therefore his descendant, it does sort of make sense to call him Frankenstein. Others see "Franken-X" as meaning X combined in a manner like that used by Frankenstein. See Dr. Fakenstein for when "Franken-X" and "X-stein" are accurately used to refer to the scientist instead of the creature.

No, this trope does not mean that "Frankenstein" is actually an unnatural abomination of lidded drink mugs.