Beggar with a Signboard 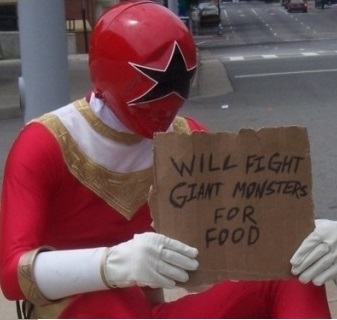 "If a homeless person has a funny sign, he hasn't been homeless for that long. A real homeless person is too hungry to be funny."
— Chris Rock, "No Sex (In the Champagne Room)"
Advertisement:

A trope that is frequently seen with people who are homeless, jobless, or both. They spend their time sitting or walking around on the streets, holding an often handwritten cardboard sign to indicate that they are poor and need help.

This trope can come in several variations, for example the beggar uses his signboard to quickly inform people of his situation and to ask them for help. A well-known example is: "homeless, please help". Another variation is demonstrated by the page image, and often used for a quick joke or Cutaway Gag. Instead of traditional begging for some change, the beggar uses his signboard to try to offer some sort of services in exchange for (most often) food or money. The most common (and serious) of them is "will work for food", but this trope can easily be Played for Laughs by making the task promised, or the good asked for by the beggar, something absurd. Some variations may include the beggar making a threat ("Give me money, or else!").

Compare: The End Is Nigh. Such a character, if played seriously, is at a high risk of turning out to be a Disposable Vagrant. Sadly Truth in Television.