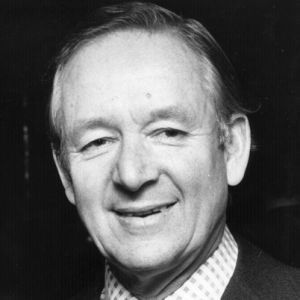 "If having a soul means being able to feel love and loyalty and gratitude, then animals are better off than a lot of humans."
Advertisement:

The really funny thing is, James Herriot was an obscure Scots soccer player.

The man who took his name as a pseudonym was bestselling author and eventual (if highly unlikely) cross-Atlantic multimedia sensation James Alfred 'Alf' Wight (3 October 1916 – 23 February 1995), in reality as well as in fiction the archetypal Kindly Vet. Thus almost singlehandedly the reason why there seem to be so many of them around in media these days.

Wight was born in 1916 in Northern England but raised in Glasgow, Scotland. Upon qualifying as a veterinary surgeon shortly prior to World War II, he ventured into North Yorkshire for the first time in 1940, to begin practice in a small farming community seat that he would dub 'Darrowby', but which was in reality Thirsk with some elements borrowed from nearby Leyburn, Middleham, and Richmond — ironically enough, about twenty miles distant from the harsh, starkly beautiful Dales his stories would make iconic to legions of tourists as 'Herriot Country'.

He entered into what would become a lifetime partnership with the eccentric, mercurial Donald Sinclairnote Not to be confused with hotel owner Donald Sinclair, who inspired the creation of Fawlty Towers, later to be accurately immortalised as Siegfried Farnon. Donald's equally unique younger brother/perpetual student Brian would feature as Siegfried's ditto Tristan, aka the light comic relief, along with various assistants. Notable among these latter would be Brian Nettleton, 't'vet w' t'badger', later to be fictionalised as 'Calum Buchanan' for the book Every Living Thing and TV series. In addition, Wight was often posted to assist other local practices in the Dales themselves, learning to love both the scenery and a host of other richly comic local characters. Also playing a prominent role in both Wight's life and fiction were his wife Joan nee Danbury (aka 'Helen Alderson') and their children, Jimmy (born 1943) and Rosie (born 1947). Jimmy went into veterinary medicine, while Rosie became a general practitioner.

Wight enlisted in the Royal Air Force in late 1942, while Joan was pregnant with Jimmy. He qualified for solo flight, but was discharged after one year because he had been classified as medically unfit to fly combat aircraft as a result of surgery.

He had always been interested in writing, but success came late. The legend goes that over the many years as a practicing vet, Wight would frequently tell his family stories about his cases and the characters involved, invariably winding up with the declaration that 'That'll go in my book someday...' Twenty years on, his wife finally called him on it, insisting that "old vets of fifty don't suddenly start writing books!" Thus inspired, Wight picked a pen name (since using his own might have been viewed as advertising for his own services, which was frowned on by professional etiquette at the time) and hit the typewriter. By 1970 If Only They Could Talk was published in the UK to... not much acclaim. Neither was the sequel, It Shouldn't Happen to a Vet.

The Herriot phenomenon didn't really take off until two years later, when the two books were combined for the American market (since the individual UK volumes were considered too short) into All Creatures Great and Small. It was swiftly followed by:

In 1979 a nonfiction companion volume, James Herriot's Yorkshire, fleshed out the world of the books in detail.

The books were an immediate and extraordinary sensation in the US, shooting to the top of every best-seller list and earning gushes like 'masterpiece' and 'modern classic' from a besotted media and public alike — heady stuff for a man who was by all accounts a quiet, pleasant, very ordinary bloke who just happened to have the true storyteller's gift. Written with deceptive simplicity and unerring comic timing, the Herriot stories are remarkable for their sincere but sentiment-free appreciation for life — both animal and human — within a setting fundamental enough to be universally nostalgic. Collectively, they also represent a fascinating record of the veterinary profession before, during and after modernization (when Wight first qualified antibiotics were nonexistent and profitable small-animal surgery a distant dream).

Wight — and later his family — have always insisted that all his stories were based in fact, albeit some much more distantly than others, and there is no reason to doubt them. However, as a private man with no wish to incur the wrath of the people he still lived and worked among, Wight did deliberately set out to ensure none of his subjects would be recognised, or recognise themselves. To that end he freely adapted stories from colleagues, consolidated incidents, changed names and places (occasionally even swapping genders), and mucked about with timelines. It is probably simplest to regard the end product as fiction that was Very Loosely Based on a True Story. All the playing fast and loose with reality, however, is merely window dressing to a series of books that capture the heart of veterinary medicine in all its messy, bloody, based-on-guesswork-and-a-bit-of-luck glory.

A film adaptation was inevitable, and in 1974 "All Creatures Great and Small" was produced starring Simon Ward and Anthony Hopkins. The TV series of the same name, running between 1978-80 (and later revived for 1988-90) was a much bigger hit, eventually becoming a classic in the UK, and would make Christopher Timothy, Robert Hardy and Peter Davison household names. A three-part miniseries, Young James Herriot, was broadcast in 2012 covering his student years in the 1930s with the looming threat of fascism casting a shadow. In 2020, Channel 5 launched another adaptation, All Creatures Great & Small (2020), starring British acting stalwart Samuel West as Siegfried Farnon, gifted veteran actress Anna Madeley as Mrs Hall, and newcomer Nicholas Ralph as Herriot.

Meanwhile Wight, along with partner and assistants, was trying to cope with an explosively popular veterinary practice that involved about 10% actually sick animals; the other 90% were eager pilgrims clutching books to be signed or pets to be appreciated. Through it all — and probably adding to it — the centre of this tourist storm resolutely clung to his unassuming outlook and lifestyle, considering himself a working vet above all else. (One documentary crew, asking one of the 'local characters' for an interview, was told that they should talk t'vet instead, since "don't let it get about... but I've heard he's written a book!")

T'vet had in fact been admitted to the Order of the British Empire as of 1979, and various honourary doctorates, fellowships and memorial awards followed regularly over the years (including, of all things, an honourary presidency of the Sunderland Association Football Club). He retired in 1989 and passed his share of the practice to his son Jimmy. His death in 1995 occasioned a service at York Minster, and his cremated remains were scattered on Sutton Bank, a hill in North Yorkshire. The old practice, along with house and grounds, has since become a historical attraction and veterinary museum.

Meanwhile, the veterinary practice he made famous still thrives as Skeldale Veterinary Centre, now located on the outskirts of Thirsk. The head veterinary surgeon is Peter Wright, who worked at the old practice with Donald Sinclair and Alf Wight while they were still practicing veterinary medicine. And the story goes on....

The books also inspired countless students to pursue veterinary medicine — both as veterinarians and as veterinary nurses — in generations to come, leading to the familiar pre-vet (nursing) professor's admonition that "If you're here because you think it's like the Herriot books, think again!"note That professor was both right and wrong. The books don't exactly sugarcoat the often dull and exhausting reality of rural veterinary medicine; the very first story finds the young Herriot assisting at a cow's difficult delivery in the middle of the night, his arm up her vagina for hours in a primitive, ill-lit barn, all the while enduring a local busybody criticizing his every move and considering how different the situation is from the textbooks. He is frequently kicked, sprayed with unmentionable fluids, and generally subject to painful slapstick on a regular basis. On the other hand, Herriot also quite accurately portrayed the rush of ecstasy that comes from hitting on the correct diagnosis and administering lifesaving medicine just in the nick of time. Essentially, those who ignored that professor and made it through the exhausting, mind-numbing, brain-overloading courses of study needed to qualify did so because they discovered that the life wasn't nearly as glamorous as they thought and decided they wanted to do it anyway.