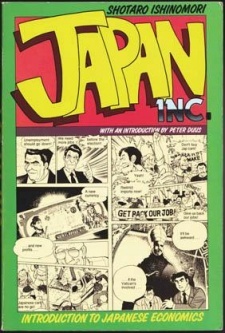 Japan, Inc. aka Manga Nihon Keizai Nyumon (an introduction to the Japanese economy) is a manga by Shotaro Ishinomori (written 1986 to 1988). It's a non-fiction manga about the Japanese economy (also covering economics in general), mostly seen from the POV of several employees of the car firm Toyosan: The managers Tsugawa and Kudo, their boss Akiyama, their female coworker Miss Amamiya, and lower-rank guy Ueda. Originally serialized in the upscale business paper "Nippon Keizai Shinbun", the manga was published as an economics textbook by the University of California.