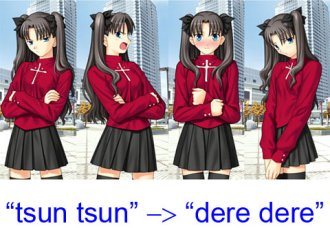 "Stupid wiki! I'm only editing you because you asked nicely, n-not because I like you. S-so don't get the wrong idea, got it?! Baka!"
"I hate and I love. Perhaps you ask why I do this?
I do not know, but I feel it happen and I am torn apart."
— Catullus 85
Advertisement:

The Japanese term tsundere refers to an outwardly violent character who "runs hot and cold", alternating between two distinct moods: tsuntsun (aloof or irritable) and deredere

The term was originally used to describe characters who began with a harsh outgoing personality, but slowly revealed a soft and vulnerable interior over time, which made this a plot trope as much as it is a character trope. Over the years the character archetype has become flanderized, and is now generically associated with a character who flips between the two emotional states at the slightest provocation, and usually at a specific person rather than a general sociability problem. The former is usually referred as Classic Tsundere and the latter as Modern Tsundere. A tsundere, especially a classic one, is usually a Tomboy with a Girly Streak.

The tsuntsun can range from the cold "silent treatment" to the hotheaded "kindergartener who pushes you into the sandbox." The reasons behind a Tsundere's behavior vary widely, but usually boil down to the conflict between their feelings of affection towards a love interest, and their reaction to having those feelings. Though in most examples the reason has something to do with a Madonna–Whore Complex or at least a fear of Slut-Shaming.

The Tsundere stock characterization is very popular with writers of Romantic Comedy because the conflicts between the two personality facets can be easily utilized to generate both drama and comedy. It also acts as a source of Wish-Fulfillment: specifically, the idea that every independent, hardened and just plain jerkish love interest (male or female) has a squishy emotional center that will embrace you after you crack the outer shell. Can be entirely Played for Laughs by pairing the Flanderized version with The Stoic or the Cloud Cuckoo Lander. Either both parties can't admit their feelings for a bittersweet tale that might end with a Dying Declaration of Love or all of the Tsundere's shenanigans are completely unnecessary.

Tsundere can be divided into two main categories, depending on their default mood:

See also the Analysis page for more detailed information on common "strategies" employed by Tsundere characters, and other, related topics. This site

has an explanation on the appeal of the Tsundere character.

A common way of showing that a Tsundere has mellowed or has had her heart won over by the Love Interest is to have her shift from Harsh to Sweet. If her motivations are inquired, she will often engage in a Suspiciously Specific Denial, complete with a Luminescent Blush and total evasion of eye contact (cue the squeaks of Moe).

When paired with a Jerk with a Heart of Gold, together they produce Belligerent Sexual Tension. If done poorly, the result is an Unintentionally Unsympathetic Jerk Sue. Compare with Well, Excuse Me, Princess!, Jerkass, Jerk with a Heart of Gold, and Bruiser with a Soft Center. Contrast with Sour Outside, Sad Inside, which shares the spiky exterior but has depression and self-doubt rather than kindness hiding underneath. When Flanderized tends to overlap with Mood-Swinger. Also see Don't You Dare Pity Me! and Anger Born of Worry; both of them likely actions with this character type. The more benevolent examples are very likely to be Good Is Not Nice (or anti-heroes). Aloof Ally may show the same hot-and-cold behavior but for differing reasons. Shana Clone is a specific subtrope with a particular set of characteristics. Because of their low tolerance for stupidity, they are always Enraged by Idiocy. These character types can fit both variants of Jerkass to One (for the first variant, they only act harsh with their love interest while is gentle with everyone else, and for the second variant, they act harsher with their love interest more than they are with others.) Tsunderes, especially the first type, are often The Unapologetic; if they warm up to their love interest, don't expect them to apologize for their hostile behavior towards them.

Please do not confuse this trope with a Mood-Swinger, who flips between all the emotional states (not just tsuntsun and deredere) and is more of an inherent mental problem encompassing more than just their romantic life. Also don't confuse with Playing Hard to Get, where a love interest deliberately chooses not to reciprocate her pursuer's interest until she's sure he's hooked, or Unknowingly in Love, where a character is unaware of their own romantic feelings.

There are a few male examples, but the tsundere is more likely to be female and interested in a male protagonist. This is likely due to the Unfortunate Implications of a male love interest constantly deriding and insulting a heroine because of his unspoken feelings for her. Male love interests with tsundere-like traits are more likely to have mutual Belligerent Sexual Tension with a girl equally as tsundere as he is, or act aloof and detached as more of a Kuudere type character. Can be a trait of a female Woobie, or other female character with an Hilariously Abusive Childhood. This way of using the trope is less likely to carry Unfortunate Implications.

This trope is Older Than Dirt, dating back to at least ancient Mesopotamia.

Now comes with a Self-Demonstrating page.

Waldorf: Kids these days. They can never seem to make up their mind, can they?
Statler: Like we're ones to talk! We're still here aren't we?
Both: Do-ho-ho-ho-hoh!
Feedback

Luz discovers Amity is actually a "sour lemon drop with a hidden sweet center", but Amity claims she's doing it for extra credit.

Luz discovers Amity is actually a "sour lemon drop with a hidden sweet center", but Amity claims she's doing it for extra credit.