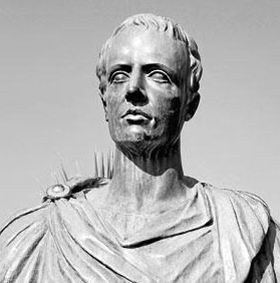 Modern bust of Catullus on the Piazza Carducci in Sirmione
"I didn't, God help me, think it mattered whether
I put my nose to Aemilius's mouth or ass,
neither being cleaner or dirtier than the other;
but his ass in fact is cleaner, not so crass
no teeth, for starters. His mouth's a cemetery inside:
headstone grinders, gums like old wagon-leather.
What's worse, that grin of his yawns about as wide
as a mule's cunt splits for pissing in hot weather,
and he screws all the girls, thinks he's got charm and class
the mill wheel's the place for him, let him go grind
grain, forget pussy! Any woman who makes a pass
at him would lick a sick hangman's rank behind."
— Catullus 97 (translation by Peter Green)
Advertisement:

Gaius Valerius Catullus (c. 84 – c. 54 BC) was a Roman poet who lived during the Roman Republic. His poetry moved away from the ancient Greek epics about gods and heroes to something closer to everyday life. It is greatly admired throughout the ages and influenced poets such as Ovid, Virgil and Christopher Marlowe. Some of his most famous poems include 5, a passionate ode to his lover whom he calls "Lesbia"; 16, an infamously obscene invective that might have been in response to the charge of slight effeminacy and immodesty; and 85, which captures the essence of a Belligerent Sexual Tension in a distich.

"O queenie Thallus, softer than a furry little rabbit,
a goosey-woosey's marrow or the bottom of an earlobe,
an old man's languid penis with its cobwebby senescence
yet also, Thallus, greedier than any fierce tornado
whenever heavenly sloth reveals the tipsy diners nodding:
just give me back that cloak of mine you pounced upon and pilfered,
the monogrammed set of face-towels too, and all those Spanish napkins,
which—-idiot—-you keep on show as heirlooms: pray unglue them
this moment from your talons and return them to me,
if you don't want your fleecy little flanks and tender poofy paw-waws
all scribbled with the lash of whips, burned with a shameful branding,
on heat (not in your usual way), just like a little skiff that's
caught in a heavy storm at sea, a hurricane of gale force."