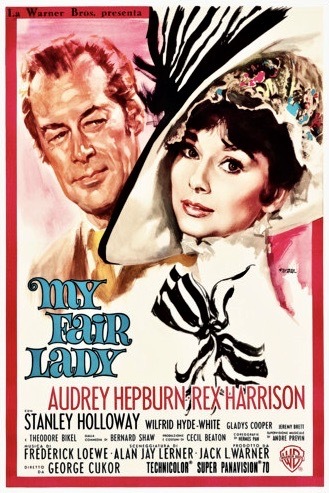 My Fair Lady is a 1964 Warner Bros. musical film adapted from the 1956 Broadway musical of the same name, directed by George Cukor and starring Audrey Hepburn as Eliza Doolittle and Rex Harrison (reprising his stage role) as Henry Higgins.

In Edwardian London, pompous phonetics professor Henry Higgins is so sure of his abilities that he takes it upon himself to transform a Cockney working-class girl into someone who can pass for a cultured member of high society. His subject turns out to be the lovely Covent Garden flower girl Eliza Doolittle, who agrees to take speech lessons to improve her job prospects. Higgins and Eliza clash, then form an unlikely bond — one that is threatened by an aristocratic suitor.