Film / Lilies of the Field 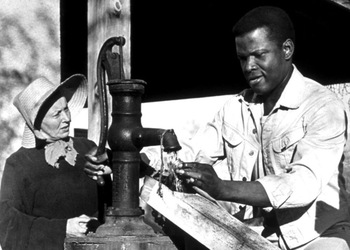 Lilies of the Field is a 1963 drama film directed by Ralph Nelson and starring Sidney Poitier.

Homer Smith (Poitier) is an itinerant laborer who is driving through the Arizona desert when he stops at a small isolated farmhouse, looking for water for his overheated radiator. The house turns out to be occupied by a group of German-speaking nuns, escapees from East Germany and elsewhere in the Communist bloc. The nuns are living a very hardscrabble life in the desert, appearing to survive on nothing more than the milk from one cow and the eggs from a few chickens. Mother Maria (Lilia Skala), the mother superior of the group, prevails on Homer to fix the leaky roof to the farmhouse, which he does.

Homer stays the night with the nuns, waking up the next morning expecting to be paid for his work. Mother Maria, however, does not pay him—eventually it becomes clear that she has no money to pay him with. Instead, by sheer force of will she prevails on Homer to stick around and do odd jobs on their little farm in return for room and board. Homer also takes on the job of driving the nuns to their Sunday mass, which is held weekly in the parking lot of a gas station, because there is no church. Mother Maria comes to believe that Homer has been sent to the nuns by God to carry out her dream: the construction of a real chapel next to the farmhouse, to give local Catholics a real place of worship. While Homer would still like to be paid in cash, he also has unfulfilled dreams of being an architect, so eventually he agrees.

This film was adapted from William Edmund Barrett's 1962 novel of the same name. Jerry Goldsmith composed the score. Sidney Poitier became the first black man ever to win an Academy Award for Best Actor for his performance, and one of only five to this day—the others being Denzel Washington for Training Day, Jamie Foxx for Ray, Forest Whitaker for The Last King of Scotland, and Will Smith for King Richard.