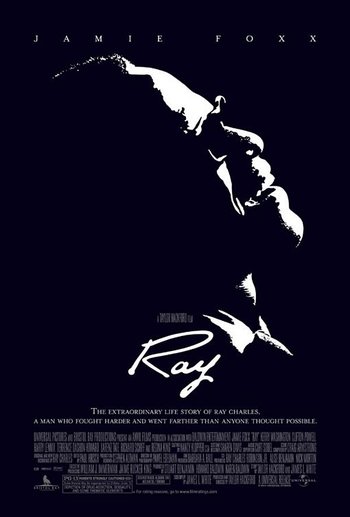 "If you wanna do something to make Mama proud, promise me you'll never let nobody turn you into no cripple. You won't become no charity case. An’ you will always stand on your own two feet."
— Aretha Robinsonnote It is unknown if she actually ever said this to Ray Charles.
Advertisement:

Ray is a 2004 Biopic based on the life and career of legendary R&B musician Ray Charles, who passed away shortly before its release. The film is dedicated to him.

Jamie Foxx plays Charles as the film shows him from his humble roots in Florida as he became blind, to his first performances in clubs, to reaching mainstream success in the 1950s and the 1960s with his unique blend of Country, Gospel, Jazz and Orchestral influences, all while dealing with racial segregation, his blindness, and a heroin addiction.

The film was a huge critical and financial success, earning Foxx the Academy Award for Best Actor.