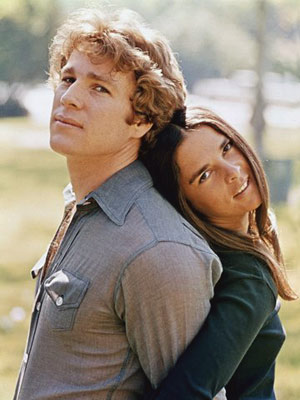 "What can you say about a twenty-five-year-old girl who died? That she was beautiful and brilliant? That she loved Mozart and Bach. The Beatles. And me."
—Oliver Barrett
Advertisement:

Love Story is a 1970 feature film based on the novel of the same name by Erich Segal. Directed by Arthur Hiller.

Oliver Barrett IV (Ryan O'Neal) is a Harvard pre-law student and varsity hockey player from an old money WASP family. When he needs to borrow a law book from the Radcliffe College library, he meets Radcliffe music major Jenny Cavalleri (Ali MacGraw), who is from a working-class Italian Catholic background and is employed by the library in a work study capacity. She initially needles Oliver for being a child of privilege and refuses to let him have the book unless he takes her out for coffee. The ice between them thaws very quickly, and they begin a romantic relationship. However, their romance does not sit well with Oliver's father (Ray Milland), who cuts off his financial support when Oliver and Jenny announce their plans to marry after graduation. They go ahead with the wedding, after which Jenny has to take a job as a private school teacher to pay Oliver's tuition to Harvard Law School. He graduates third in his class and gets a job at a prestigious New York law firm; she resists his suggestion that she audition for the Juilliard School in favour of trying to have a child. But when they struggle to conceive and seek medical advice, they receive a devastating diagnosis: Jenny is terminally ill.

The book and film were followed by a sequel, Oliver's Story, in 1977 (book) and 1978 (film), in which Oliver tries to lose himself in his work to get over Jenny's death. However, his political views are at odds with those of his senior partners, while a promising relationship with heiress Marcie Bonwit founders as he struggles to move past his memories of his life with Jenny. The film is known for starring a pre-Murphy Brown Candice Bergen.

In February 2021, a series was reported to be in development for Paramount+.

Oliver: Do you have The Waning of the Middle Ages?
Jenny: Do you have your own library?
Oliver: Listen, Harvard is allowed to use the Radcliffe library.
Jenny: I'm not talking legality, Preppie, I'm talking ethics. You guys have five million books. We have a few lousy thousand.
Oliver: Listen, I need that goddamn book.
Jenny: Wouldja please watch your profanity, Preppie?