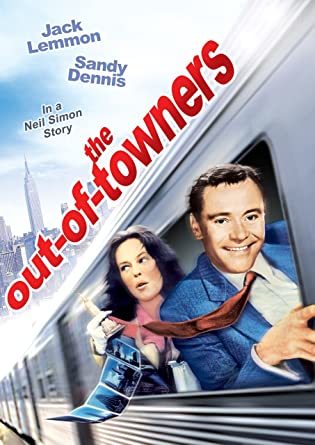 The Out-of-Towners is a 1970 American comedy film written by Neil Simon, directed by Arthur Hiller, and starring Jack Lemmon and Sandy Dennis.

The film centers on the married couple of George (Lemmon) and Gwen Kellerman (Dennis). They live in Twin Oaks, Ohio, but George's company has invited him to interview for a possible job promotion in New York City. From the moment they depart their home town, the Kellermans suffer nearly every disaster out-of-towners could possibly experience, with George maniacally and desperately collecting the names of everyone who wrongs them—vowing to sue every last one of them—and Gwen accepting each new indignity with quiet resignation.

Remade in 1999, with Steve Martin and Goldie Hawn in the main roles.