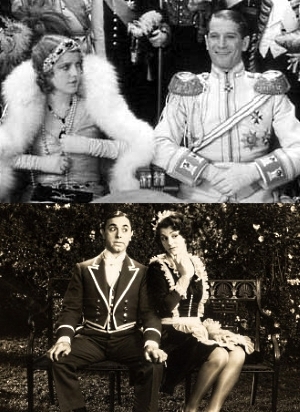 The Love Parade is a 1929 Musical Romantic Comedy film starring Maurice Chevalier and Jeanette MacDonald, directed by Ernst Lubitsch. The music is by Victor Schertzinger, with lyrics by Clifford Grey.

Count Alfred Renard, military attaché to the Sylvanian Embassy in Paris, is ordered back to Sylvania to report to Queen Louise for a reprimand following a string of scandals, including an affair with the ambassador's wife. In the meantime Queen Louise, ruler of Sylvania in her own right, is royally fed up with her subjects' preoccupation with whom she will marry. When Count Alfred returns in disgrace from Paris, the queen invites him to demonstrate his romantic prowess. The cabinet is pleased by their blossoming romance.

Louise and Alfred marry, but he soon is irked at having to take orders from his royal wife, though he is forced to keep up appearances because of financial negotiations with a foreign power. When he is ordered to attend the opening of the royal opera, Alfred refuses; he announces he is going to Paris to get a divorce and is cold to the queen's entreaties. But when she offers to make him king, he relents and they find happiness together.

The Love Parade contains examples of these tropes: