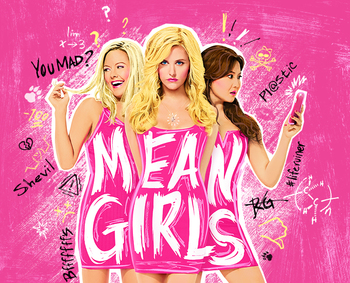 Don't be fooled by the pink.
Advertisement:

Mean Girls is the musical adaptation of the 2004 film of the same name. Tina Fey, writer of the film's screenplay, wrote the musical's book, while the music and lyrics are penned by Jeff Richmond (Fey's husband) and Nell Benjamin (of Legally Blonde fame), respectively. After five years of development and a test run in Washington, D.C., Mean Girls officially opened on Broadway in April 2018.

The musical more or less follows the plot of the film, with certain changes made to the setting and its characters. Most notably, its story is brought into the The New '10s, with social media playing a substantial role that didn't exist in the film (which predates Twitter and the like), and updated cultural references, such as the POTUS in office when it debuted.

After its premiere, Mean Girls was nominated for a total of twelve Tony Awards, including Best Musical. In January 2020, it was announced that the musical would be adapted into a film.

Karen describes the strange sexy costumes at the costume party

Example of:
Sexy Whatever Outfit

Karen describes the strange sexy costumes at the costume party