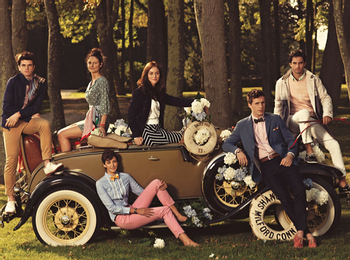 Oh look, a WASP nest.
Herbert: You, what are your roots?
Executive: Well, I guess you could say they extend to when the Angles met the Saxons.
Herbert: Or in other words, when white met bread!
— The Simpsons, “Oh Brother Where Art Thou”
Advertisement:

The Whitenote or less commonly: Wealthy since White and Anglo-Saxon is tautological Anglo-Saxon Protestant, or WASP, is a largely American trope that today is used to describe the stereotypically "white" (and mostly upper- or upper-middle class, as the term is usually not applied to working-class poor whites and white Southerners associated with Deep South stereotypes.... even though those groups technically fit the definition) people in American society and culture.

The term originally referred to New Englanders, New Yorkers, and even Tidewater Southerners from wealthy, Anglo-Saxon (English) backgrounds, generally either Congregationalist or Anglican/Episcopalian doctrinally, but it eventually came to be applied to inland Southerners, Midwesterners, Northwesterners, and Westerners as well, regardless of income level or sect. It also came to be roughly synonymous with "Protestant", so that even Protestant Irish, Scandanavians, Dutch and Germans were eventually called WASPs. "White Protestants" wasn't as snappy a term as WASP, so usage of the term has hung around.

It became important in the mid-20th Century to point out the features of this group as a social reality. Generally WASPs were in positions of privilege and power, and could discriminate against those who were not white and not Protestant. Ethnic minorities (which may no longer be minorities in the New Millennium), non-Anglo Europeans, Jews and Catholics in particular suffered discrimination and exclusion. Critics pointed out how WASPs would see themselves as the "true normal" of the cultural world. This, ironically, led to the "generic and bland" stereotype that so many WASPs are now desperate to shed. It can easily be conflated with the Boston Brahmin, First Families, Secret Masters of the World stereotype. They (the two stereotypes) share a core characterization, but WASP is a straight-up acronym of a demographic label, a thing you might find in a sociology text, not having any of the Old Money, Secret Masters baggage.

Strictly speaking, it is hard to generalize about WASPs. Since a majority, albeit a slim majority, of Americans are both white and Protestant, WASP covers a lot of demographic ground. They can be either liberal or conservative politically (fiscally conservative but culturally liberal being a frequent combination), and fill any socioeconomic niche. This trope is primarily for figures who meet the most stereotypical WASP criteria: affluent, generic, bland personalities, usually with a little bit of stuffiness inherited from their British ancestors and a preoccupation with keeping up appearances. These days, much of the WASP characteristics can be found ironically enough, in the non-WASP Irish-American community, especially in Boston. Thanks to ethnic succession

with Irish Catholics being the first immigrant waves, they have integrated and assimilated strongly into the WASP hegemony, with John F. Kennedy's election being a symbol for the acceptance of the Irish Catholic community into the mainstream, and Kennedy being, alongside Barack Obama and Joe Biden, the only non-WASP President of the United States.note Sometimes Martin Van Buren is also included as a non-WASP president, as he was of Dutch descent and not British ("Anglo-Saxon"). It also helps that he was the only US President to speak English as a second language (Dutch was his first). Others however still feel he qualifies as WASP since he's non-immigrant, and comes from a country and culture that is Protestant and allied to England, so while he may not be Anglo-Saxon, he's still White/Protestant and non-immigrant.

The Hays Code had this effect on classic Hollywood cinema. Although written by two Irish Catholics, the Code was enforced mostly by Midwestern Protestants, and the films under its jurisdiction cut according to their biases which in turn reflected the biases of America's conservative ideology of that time. American characters in movies from the 1930s and '40s do tend to all look and talk the same, with only minor regional differences. Non-Anglo/Nordic Americans don't tend to show up - and when they do, they are "conventionalized" as much as possible. Not until the 1950s would the existence of "ethnic" whites be openly acknowledged. Many of the classic Hollywood actors weren't WASP themselves but became WASP to fit in with the values of the time. Hispanic-American Rita Hayworth is a famous example, as are a number of Jewish-origin actors who changed their names to better fit in (Lauren Bacall for instance). This ended in the New Hollywood era with The Godfather with its Italian-American setting and cast, marking the start of greater on-screen diversity and largely ending the age when actors needed to alter their ethnic make-up or personal names to pass as WASP. In fact, nowadays the opposite will often be the case, at least in fiction: Suddenly Ethnicity is used to "spice up" an otherwise "ordinary" protagonist, especially if this person does not otherwise conform to WASP stereotypes.

Japanese people might be viewed as the Asian counterpart to this trope, given their stereotypically stern work ethic and obsession with tradition and good manners; while Chinese people and other Asian nationalities might fill in for Catholics (more colorful, festive, and "spiritual"). And within China, there is a similar divide between Confucianism (middle class and socially conservative) and Daoism (more earthy and countercultural, and roughly akin to some "ethnic" flavors of Catholicism), with Buddhism viewed as exotic and associated with foreigners (so, analogous to Judaism or Islam in the West).

Not to be confused with Wicked Wasps, which is about evil, mean, or bad literal wasps, despite "wicked" being a New England slang term and the WASP spelled with all capital letters originating in New England.

Compare and contrast with Christianity Is Catholic. See Irishman and a Jew for a similar ethnic fault line, with Jews (usually) filling the WASP niche. Other associated tropes are Upper-Class Twit, Rich in Dollars, Poor in Sense, Jerk Jock, Seemingly-Wholesome '50s Girl, Stepford Smiler, Granola Girl, Bourgeois Bohemian, and Valley Girl (despite originating in the San Fernando Valley in California). More positively, they may be associated with The All-American Boy or the Girl Next Door. Especially common in Hollywood New England, though they may also be found in Everytown, America and Suburbia (especially the Stepford Suburbia variety). See also American Accents for more variations and stereotypes associated with them.