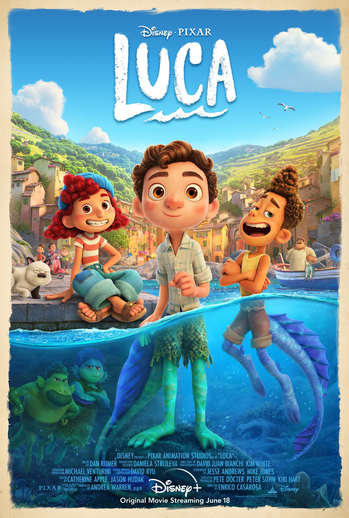 "Every day we’ll ride some place new. And every night we’ll sleep under the fish. No one to tell us what to do, just you and me out there. Free!"
— Alberto Scorfano
Advertisement:

Luca is the twenty-fourth animated film offering by Pixar. It was directed by Enrico Casarosa with a screenplay by Mike Jones (co-writer on Soul) and Jesse Andrews. The second direct-to-digital Pixar film, it was released on the Disney+ streaming service on June 18, 2021, alongside an exclusive one-week theatrical run at the El Capitan Theatre.

Luca Paguro (Jacob Tremblay) and Alberto Scorfano (Jack Dylan Grazer) are two young boys who are having an amazing summer in Portorosso, a beautiful seaside town in the Italian region of Liguria. However, between their fun Vespa rides and partaking of Italian cuisine, the duo is hiding a major secret from all others — they're actually sea monsters who transform into humans when on dry land.

On Disney+ day, November 12, 2021, the streaming service released a short film that follows the adventures of Alberto in Portorosso called Ciao Alberto.

Luca leaves for another city, and Alberto is there to bid him goodbye at the train station.

Luca leaves for another city, and Alberto is there to bid him goodbye at the train station.