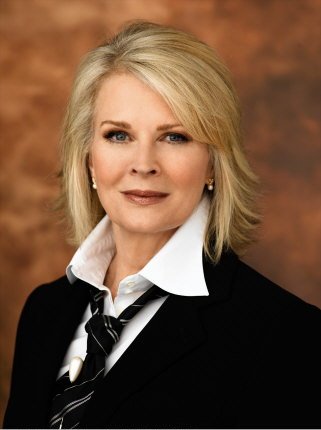 Candice Patricia Bergen (born May 9, 1946 in Los Angeles, California) is an American actress, former fashion model, and darling of the television industry.

A five-time Emmy Award winner for her title role in the hit 1988–98 sitcom Murphy Brown, Bergen has since graced the small screen as a Special Guest in series such as Seinfeld, Law & Order, Sex and the City and Will & Grace. Younger tropers will perhaps most likely recognize her as Shirley Schmidt, the foxy, feisty, brilliant attorney lusted after (and loved) by both Denny Crane and Alan Shore in the hit series Boston Legal. In the '90s she also appeared in many commercials for Sprint long-distance telephone service, advertising the ten cents a minute plan they offered at the time

Bergen is no stranger to the silver screen, either. She made her big-screen breakout in Carnal Knowledge and has since starred in critically acclaimed films such as Gandhi, The Wind and the Lion, and A Night Full Of Rain, as well as such blockbusters as Miss Congeniality, Sex and the City and Sweet Home Alabama. She even earned herself an Academy Award nomination for her role in the 1979 romantic comedy Starting Over, but lost to the acting tour de force that was Meryl Streep in Kramer vs. Kramer.

The daughter of ventriloquist Edgar Bergen, she was married to French film director Louis Malle from 1980 until his death in 1995, and had one child (daughter Chloe Françoise) with him. Since 2000 she has been married to real estate developer Marshall Rose.