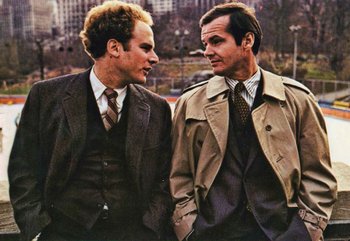 Carnal Knowledge is a 1971 Dramedy directed by Mike Nichols, from a script by prolific cartoonist/writer Jules Feiffer. It's about the sexual misadventures of Jonathan (Jack Nicholson) and Sandy (Art Garfunkel), in three distinct acts set over a period of two decades.

Act I, circa 1950: Jonathan and Sandy are roommates at Amherst College in Massachusetts. Jonathan is obsessed with sex, while Sandy wants to find love. At a mixer, they both notice Susan (Candice Bergen), a student at nearby Smith College. Jonathan dares Sandy to ask her out. He approaches her, but she actually initiates the conversation. Soon Sandy and Susan are a couple, but Jonathan also secretly has a relationship with her. Eventually, she chooses Sandy.

Act II, circa 1960: The two men are now living in New York. Sandy is a doctor, Jonathan is an accountant. Sandy has married Susan and has settled into a domestic life. Jonathan prides himself as a Casanova but admits that he'd settle down with the right woman. He meets Bobbie (Ann-Margret), a curvaceous, but dense, actress. They eventually start living together, but between his self-centeredness and her imperfect psychological state, it's not a peaceful pairing. Meanwhile, Sandy grows bored with his bland married sex life and divorces Susan in favor of the younger Cindy (Cynthia O'Neal).

Act III, circa 1970: Both men are now 40 and suffer through a mid-life crisis. Sandy has begun a relationship with an 18-year-old hippie named Jennifer (Carol Kane), claiming that she's helped him achieve peace of mind. Jonathan has turned into a bitter misogynist, with erectile dysfunction issues. It's revealed that he married Bobbie and they had a daughter, but are now divorced. The film ends with Jonathan visiting Louise (Rita Moreno), a prostitute for whom he's a regular client. They end up doing an obviously much-practiced roleplaying routine: he lays back while she praises him for being a "real man".

A huge hit (one of the top 10 earning films of 1971) that also received lavish critical praise, it solidified Nicholson's star power and boosted most of the rest of the cast. But its sexually frank content, as well as nudity and profanity, made it hugely controversial as well, and it's still quite an eye-opener even today.