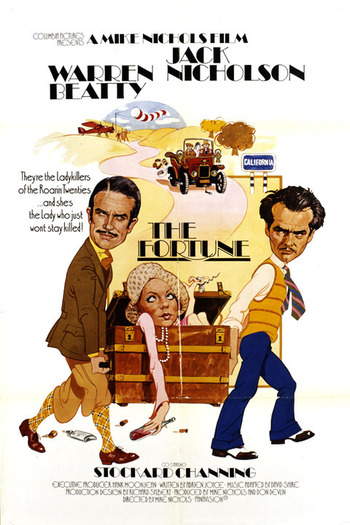 The Fortune is a 1975 crime comedy film directed by Mike Nichols.

Oscar and Nicky (Jack Nicholson and Warren Beatty) are con artists and petty criminals in what appears to be the late 1920s.note A picture of Charles Lindbergh means that it's some time after Lindbergh's 1927 flight.. As the film opens the two of them are running off with rich heiress Frederica "Freddie" Bigard (Stockard Channing in her first starring role). Freddie and Nicky are lovers, but Nicky has a wife lingering around somewhere, so he can't marry Freddie, and if they go away together her rich father could have him prosecuted for violating the Mann Act. So she marries Oscar for show, and the three of them head to California, with Nicky pretending to be her brother.

A young Christopher Guest appears briefly as the man enjoying Auto Erotica with his girlfriend.