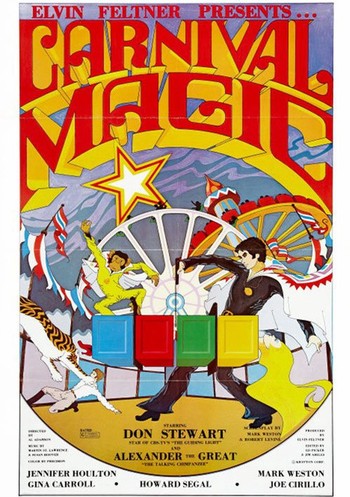 Carnival Magic is a 1981 fantasy film starring Don Stewart as a magician who sets out to save a local carnival from going out of business with a super-smart talking chimpanzee. Complications and hijinks ensue as Alex the chimp gets into mischief, and a jealous lion-tamer and an unscrupulous doctor cause trouble for Markov and the rest of the heroes.

Of some note, the film was considered the great "lost" Al Adamson film for many years, until a 35mm print was found in a warehouse in 2009.

This movie was featured in an episode of the reboot of Mystery Science Theater 3000. Tropes pertaining to that episode can be found here.

This movie contains examples of the following: