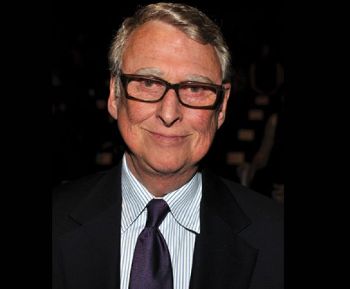 "The only safe thing is to take a chance."
Advertisement:

He began his career as a comedian, teaming with Elaine May (another future director) to form the acclaimed Comedy Duo Nichols & May. Afterwards, he notably worked as a director for 49 years. He began in 1960, directing stage productions of The Importance of Being Earnest and Saint Joan in Vancouver, and contributed original material for a 1962 CBS Carnegie Hall special starring Julie Andrews and Carol Burnett. He made his Broadway directorial debut in 1963 with Neil Simon's Barefoot in the Park, then helmed such other plays as Luv and The Odd Couple before moving into films. (He came back to theater to direct the original production of Pulitzer Prize-winning play The Gin Game.) Nichols is also notable as being one of eleven people to have won an Oscar, an Emmy, a Tony, and a Grammy—in other words, all four of the major American entertainment awards. It took him 51 years to collect all four, the longest of the group.

Carly Simon often did the songs for his films, most notably the Academy Award-winning song "Let the River Run" for Working Girl and "Coming Around Again" for Heartburn.

He passed away of a heart attack on November 19, 2014, nearly two weeks after his 83rd birthday.

Not to be confused with the American director Jeff Nichols.