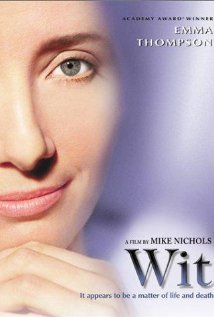 A 1999 Pulitzer-Prize winning play by Margaret Edson that was later adapted to television by Mike Nichols and Emma Thompson, Wit is about Vivian Bearing, an English professor who specializes in the metaphysical poetry of John Donne, who finds out she has an aggressive case of ovarian cancer. The story depicts her struggles with her illness and chemotherapy, as well as dealing with hospital bureaucracy. She spends much of the story discussing the situation with the audience, reflecting on her life and the choices she's made, as well as the poetry she's studied and how it relates to her current condition.

The film version of Wit includes examples of: