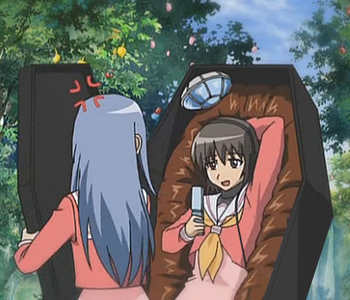 rez @ next town k thx
Miracle Max: It just so happens that your friend here is only mostly dead. There's a big difference between mostly dead and all dead. [...] Now, mostly dead is slightly alive. Now, all dead, well, with all dead, there's usually only one thing that you can do.
Inigo Montoya: What's that?
Miracle Max: Go through his clothes and look for loose change.
— The Princess Bride

The step in between Non-Lethal K.O. and Final Death. It took Jesus three days to come Back from the Dead, but for your party members all it takes is for you to fork over the cash. The procedure is relatively common in in-game mechanics, but possibly restricted to the wealthy.

Game mechanics-wise, there's little difference between Only Mostly Dead and Non-Lethal K.O.. It's the general feel of the plot that is affected. Some writers feel that this cheapens death too much, or complicates Plotline Death, so they don't use this trope. On the other hand, it avoids the problems a Non-Lethal K.O. has with plausibility — a mighty robo-demon topples an entire flaming skyscraper onto you, and you are merely unconscious.

Occasionally, a writer may put in guidelines to explain the difference between Only Mostly Dead and All Dead. This could be the amount of time that passed since death (the soul was still in the Afterlife Antechamber), or amount of damage to the body (Chunky Salsa Rule is virtually always All Dead without Deus ex Machina). Compare with Universes where the Necromantic can only ensure the dead Came Back Wrong. If you inflict a genuine Character Death and they're still "alive" in a manner of speaking, then you need to make them Deader Than Dead.

Contrast with Almost Dead Guy, who is presumed to be a lost cause. Traditionally, if the characters believe the Almost Dead Guy can be saved, it is only due to Genre Blindness, and angsting will soon ensue.

Not to be confused with Not Quite Dead. This may lead it to be a Disney Death.

If this triggers something that was supposed to occur upon the character's death, it's the Revival Loophole.

Given that this is a Death Trope, there may be unmarked spoilers. You Have Been Warned.