Tabletop Game / The One Ring 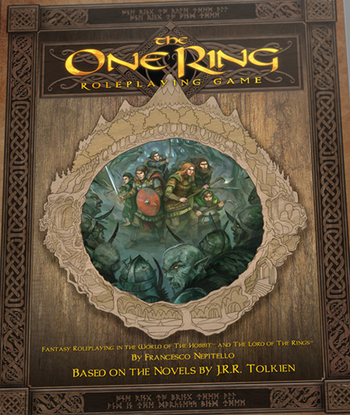 A tabletop role-playing game based on The Lord of the Rings and The Hobbit. It has now published two editions, the first designed by Sophisticated Games and published by Cubicle 7 from 2011-2020, the second published by Swedish publisher Free League Publishing and released in 2022.
Advertisement:

The One Ring 1E was initially set in the TA 2940s, shortly after Bilbo returns from his adventure to the Lonely Mountain and approximately seventy years before Frodo leaves the Shire in The Lord of the Rings. The Second Edition jumps forward to TA 2965, with Sauron back in Mordor, his Nazgûl reoccupying Dol Guldur and the Shadow on the rise once more. In 1E, most of the focus is on the lands of The Hobbit, though over time maps and setting information were published for other areas. Second Edition moves the focus west to Eriador, to the lands around the Shire and Bree all the way north to the old haunts of the Witch-King.

The game uses custom dice, but is completely playable with regular d12s and d6s. The basic game mechanic is to roll the d12 "fate die" and a number of d6 "skill dice" equal to the skill you are using to beat a given target number, usually 14 for average tasks. A 12 on the fate die is an automatic success, indicated by the Gandalf rune on the custom dice. Roll an 11, however, and you get the Eye of Sauron instead, which isn't an automatic failure but usually means that bad things happen if you did fail the roll. If you succeed, the number of 6s you rolled on the skill dice indicates if you had a great or extraordinary success. This is indicated by a "tengwar" rune on the six face of the custom dice. If you fail a roll, you can spend a Hope point to add the appropriate attribute rating to the final result, possibly turning failure to success. Spending too many Hope points, however, leaves you open to becoming miserable or the corruption of darker powers.

Another notable game mechanic is the travel system. The maps of Middle-earth show the difficulty of traveling through given areas, and long days of travel slowly drain a character's endurance until they are fatigued and half their skill dice stop working. Even worse, traveling through areas under the influence of the Shadow can give characters shadow points that slowly corrupt them. Recovery from long journeys requires staying in a sanctuary - places like Rivendell or the House of Beorn. There are no spellcasting player characters. Player characters can learn some talents that are obviously magical, but there are no spells or spell lists. Some NPCs are spellcasters, though.

A sister game called Adventures in Middle-earth with the same setting and artwork but using the 5th edition Dungeons & Dragons rules was also published by Cubicle 7. It has even had some of the same adventures adapted to it. See also Middle-earth Role Playing , the 1981 game from Iron Crown Enterprises that is mechanically very different.