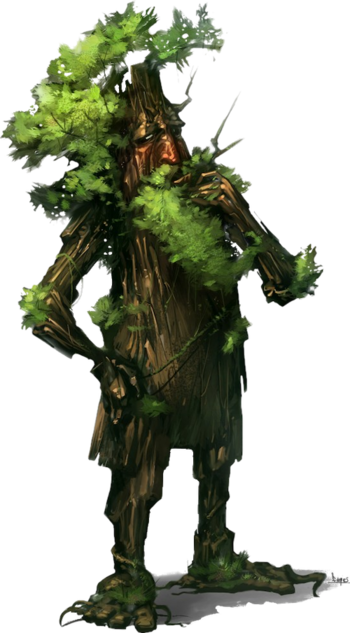 Best lower your axes while he's around.
Advertisement:

This is a very specific type of Plant Person, usually found in High Fantasy worlds, resembling humanoid trees (often nondescript deciduous trees, but more specific or exotic types show up from time to time). They're typically very long-lived if not immortal, and if so will often be portrayed as very old and wise. You can expect them to be big, too — they'll usually be the same size as giants, when both races exist in the same setting. These kind of beings will often be incredibly strong, or have a Green Thumb that gives them the ability to control regular plants. The degree to which they are humanoid can also vary. At one end of the scale, they may essentially be giant humans made out of wood and with leafy hair. At the other they may simply be mobile trees, with only rough limbs and facial features, and completely indistinguishable from regular trees when still.

More often than not, their first and foremost concern will be protecting and caring for their home forests. As a result, indiscriminate logging and exploitation of nature (and, if the setting has it, pollution) will be the most surefire way to arouse their anger — and their anger is a thing to be feared. Outside of that, they're typically uninterested in what goes on outside their forest homes, although they may be on good terms or even associate with races that are In Harmony with Nature, such as elves, fairies and Nature Spirits.

Depending on the work, they can be either a natural and self-sustaining race, regular trees that are "awoken" or transformed into humanoid creatures, or a mixture of the two.

Historically, they're based on Tolkien's Ents, which may also be the reason they don't show up in fiction as often as Tolkien's other races — since Tolkien straight up invented them instead of borrowing from mythology, his estate has a much stronger copyright claim than it does to his other races, which can explain both why they never gained the universality of elves or dwarves and why few are actually called Ents; the more direct adaptations are usually referred to by more lawyer-friendly names such as Treemen, Treefolk and Treants ("tree" plus "giant") instead. Regardless of the name, they are often included among the Standard Fantasy Races.