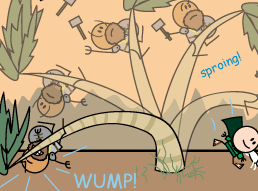 In animation, seeing a tall, skinny tree anywhere is a sure sign that someone is about to go flying.

In the world of cartoons, any sufficiently tall, flexible tree can be transformed into a trebuchet

. The formula is generally as follows:

A frequent variation is for a character to use a tree snare — a tree purposefully bent low, with a trap tied to one end. Usually, the hunter will find himself either riding the tree out of town, or thrown back and forth after they get caught in his own trap.

Another variation is the villain choosing to catapult himself with a tree, either to reach something higher or to jump over a wall. The effect varies from catapulting directly into the ground to missing the target by one inch.

Yet another variation is the hero using it to launch himself. This works, unless it's too early in the story for success.

Tree Buchets are named after trebuchets

(pronounced 'treh-byu-shay'). Note that the classic Tree Buchet is not an actual trebuchet: trebuchets work using a lever with heavy counterweights. Tree Buchets work because trees are apparently perfectly elastic. Most likely to appear in worlds where Bamboo Technology is prevalent. Can be a result of Watch Out for That Tree!.

Compare Catapult to Glory, where this is done with an actual catapult. Note that to some extent this has been deemed "Busted" by MythBusters.