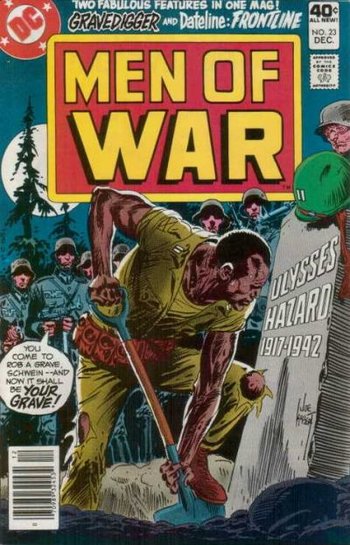 Code Name: Gravedigger was a feature about Captain Ulysses Hazard that ran in every single one of the original twenty-six issue run of DC Comics' Men of War from Aug. 1977 to Mar. 1980. The character has made infrequent appearances in The DCU since then. Code Name: Gravedigger was created by David Michelinie and Ed Davis. Gravedigger was one of the last major characters to be created for DC's war books before they were all cancelled in the mid to late 80s, and the last to be based in World War II. (The Mercenaries, who first appeared in 1982 and ran in G.I. Combat until its cancellation in 1986 were a modern day military unit.)

Ulysses Hazard suffered from polio as a child, and was tormented by bullies. After a regimen of exercise he was able to condition his body to optimal level. When the United States enters World War II, Ulysses joins the army but found himself in a segregated military, in which all Black soldiers are put to work in menial units: burying bodies, supply delivery, or kitchen work. Frustrated on being placed on permanent graves detail, he goes AWOL, and sneaks into a meeting of the Joint Chiefs of Staff at the Pentagon. Impressed by his skill, they make into a special one-man unit codenamed "Gravedigger", and send him on dangerous missions throughout the European Theatre. Later, during combat with the Nazis, he receives a scar across his face that resembles a cross.

In the backup story "Snapshot: Remembrance" in the retrospective mini-series DC Universe: Legacies #4, set during a reunion on July 4, 1976, it is revealed that Ulysses Hazard did survive the end of the war, staying in the Army and reaching the rank of colonel. The other attendees are Jeb Stuart of The Haunted Tank, The Losers, Mademoiselle Marie and possibly the Unknown Soldier. Marie's son, who resembles Sgt. Rock, briefly appears.

A version of Gravedigger played by Wayne Brady appeared in the third season of Black Lightning (2018) as an antagonist.