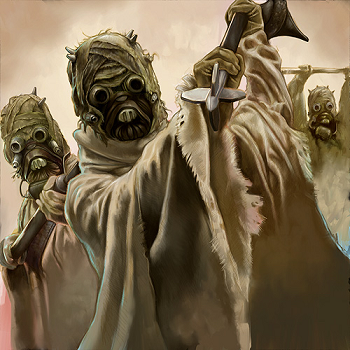 Life out in the desert is really harsh. With barely any rain or soil to grow crops, and a lack of other natural resources, tiny desert villages can be really terrible places to live.

Because of this, many people living out in the desert only have the choice of thievery as a way of living. They prey on unsuspecting travelers crossing through the desert: hiding behind dunes planning an ambush, then making a quick strike to grab the loot. In most media, they're dressed in turbans and veils that both protect their faces and conceal their identities. They mostly appear either in Arabian-style stories, or as a Fantasy Counterpart Culture of Arabian cultures. The western variation is also fairly common; they tend to wear black hats and bandannas around their mouths for the same reason as Arabian veils. Guaranteed to show up in any Desert Punk story.

Sometimes related to, and sometimes contrasted with, Bedouin Rescue Service.