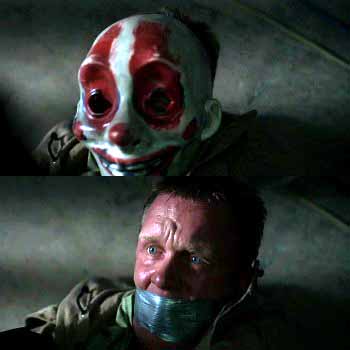 "The SWATs are targeting the wrong people.
The clowns are the hostages."
Advertisement:

Basically the villain has hostages. The Cavalry are ready to storm the fortress and rescue them. Suddenly the heroes (or just the viewer) realize that the villains have restrained the hostages, forced them into their uniforms, put tape on their mouths and fastened weapons to their hands. This can turn out in three different ways;

The Cavalry are always fooled by this (at least, at the start, although lone protagonists have a better chance of working out what's going on in the nick of time).

Compare to Fakeout Escape, where the villain makes it look as if an escape has already happened, Decoy Getaway, where the villain escapes while the heroes are distracted by the disguised hostages, and Outfit Decoy, where clothes or the inanimate objects wearing them is used in a deception. Contrast Trojan Prisoner, where the heroes pretend to be villains with hostages so the real villains will let them go about their business and False Innocence Trick or Faked Kidnapping for when a villain is pretending to be a hostage and Dressing as the Enemy, where the heroes deliberately do this.