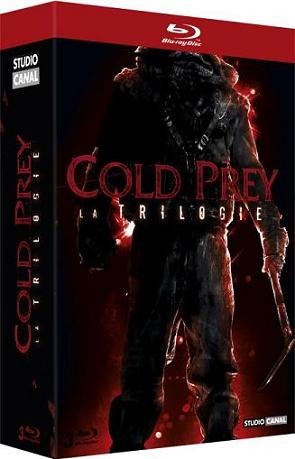 The trilogy uses a lot of common Slasher Movie tropes and clichés, while subverting a few at the same time. Although the common tropes make the events that unfold in the films somewhat predictable, the acting, cinematography and genuinely foreboding atmosphere won over audiences and critics.

The first film follows a group of five friends - Jannicke, Eirik, Morten Tobias, Mikal and Ingunn - as they drive into the mountains of Jotunheimen for a day of snowboarding. Unfortunately, things turn sour when Morten has an accident, breaking his leg. Miles away from civilization, with the car too far away and realizing that Morten's injury cannot be treated in the wilderness, the group spot a nearby hotel and decide to seek help there.

Upon their arrival, they discover that there is no-one to be found at the hotel. After treating Morten's injury with supplies found within the building, the group decide to seek shelter for the night, with the intention of going for help in the morning. Eirik, Mikal and Ingunn go off to explore, while Jannicke stays and looks after Morten. The first three discover the electric generator of the hotel. Eirik fixes it, restoring power to the hotel. Afterwards, the three discover some odd things within the building, including a fire axe cabinet (with the fire axe missing), a burnt-out room with a broken window, a bathroom with strange stains in it, and Eirik hears a strange, unidentified noise. Thinking little of it, they all return to the parlor. As they are all relaxing, Jannicke finds the hotel's guestbook and discovers that the last guest checked in sometime during 1975. Under the names of the last registered guests, there is a message reading: "We hope you find your son".

What they don't realize, however, is that they are being watched...

Second film picks up where the first ended and brings the story to conclusion. Third film shows the killer doing his thing in the eighties.