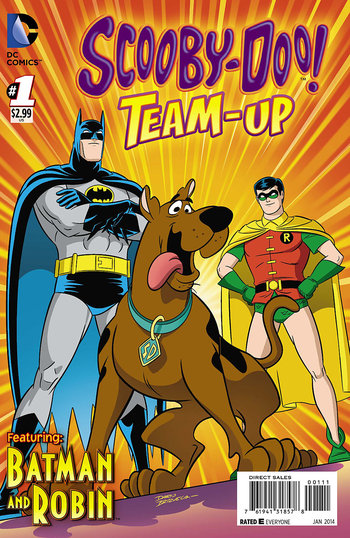 A comic book series in the Scooby-Doo franchise published by DC Comics that ran from 2013 to 2019. The comic is set up in single-issue stories where the gang of Mystery Incorporated teams up with a special guest star(s) (usually either a character from Hanna-Barbera's non-Scooby-Doo shows or The DCU) to combat whatever evil force is threatening the locale, making is a Spiritual Sequel to The New Scooby-Doo Movies. In the digital release, the comics were split in half, making a total of one hundred issues and having the first part of the story end on a cliffhanger before resolving it in the second part.

A total of 50 print issues (100 digital issues) were created before the series ended.