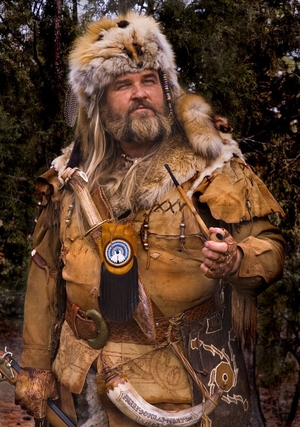 "By God, I are a mountain man, and I'll live 'til an arrow or a bullet finds me. And then I'll leave my bones on this great map of the magnificent..."
— Del Gue, Jeremiah Johnson
Advertisement:

A man who makes his solitary living in the wilderness of Canada or the northern US, most often as trapper or hunter. One of the most recognizable characters in The Western, the Mountain Man is always presented as a large man, covered from head to toe in fur and skins, even in seasons and areas where these would not be needed. When they want to get fancy, they'll wear fringes as well. The whole ensemble is often topped with a coonskin cap.

They also usually sport a very large beard and rather long hair, though if one is the main character he will often have no beard, or a much smaller, scruffier one.

Common equipment includes various traps, a rifle (often anachronistic), and of course a really big knife, either a Bowie knife or an Arkansas toothpick (a type of broad-bladed dagger).

When they are the heroes of the piece, they are often employed as scouts or trackers.

As the heyday of mountain trappers was before that of cattle drives, he may be visibly older than the cowboys and other stock characters. His gun will often be out-of-date (as previously noted) and he may speak in a strange or antiquated way.

They are often shown alternating between fighting and hanging out with the local natives, sometimes doing both at the same time with two different tribes. Their other common enemy is the grizzly bear, and they are often shown killing them in hand-to-hand combat.

In newer media, they are often portrayed having native wives. This was quite a common occurrence historically, but for most of the 20th century wasn't shown in media, due to stronger interracial marriage taboos than now.

They are often portrayed as incredibly strong, being The Big Guy of western characters. This is also one of the character types most prone to going native.