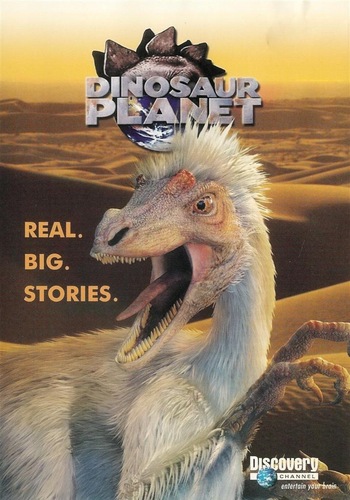 Before it was our planet, it was theirs.
Advertisement:

Dinosaur Planet is a dinosaur-themed Speculative Documentary Mini Series that aired on the Discovery Channel in 2003. It followed in the footsteps of the famous and highly successful Walking with Dinosaurs from BBC, and Discovery's own When Dinosaurs Roamed America (produced by much the same team).

Like the above shows, it used CGI to recreate long-extinct creatures, and placed them into real-life backgrounds. However, as opposed to its forerunners, all four of Dinosaur Planet's hour-long episodes took place in the Late Cretaceous, and each told the story of one or two main dinosaur characters:

As the above descriptions may tell, the stories seem much more fantasy-like, as opposed to being strictly scientific reenactments of prehistoric life on Earth. The "humanizing" of the dinosaurs doesn't stop at giving them names. The Narrator gives us an insight into their thoughts and feelings, and a large number of plot elements seem to have been lifted straight out of an adventure novel. Does this make the documentary more engaging or rather laughably implausible? That's for the viewer to decide.

Not to be confused with the very similarly titled Planet Dinosaur, which is a BBC production, or the cancelled Nintendo 64 game of the same name which later became Star Fox Adventures.