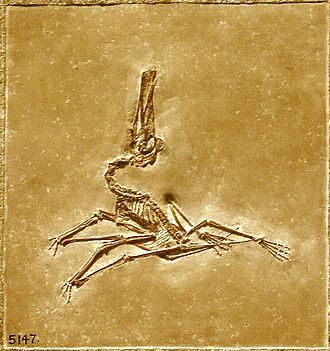 If you're looking for:

Master of the Air: Geosternbergia

A Whale of a Pterosaur: Pterodaustro

The Biggest? Or Not?: Tropeognathus

Titans of the Oceans

As Big as the Blue Whale?: The "Lilstock Ichthyosaur"

The Last Plesiosaurs: the Elasmosaurids

Teeth for Any Food: Hainosaurus

There were many other groups of sea reptiles in the Mesozoic other than the previous ones. Among them, giant turtles in the Cretaceous (such as Archelon); sea crocodiles in the Jurassic, some of them very fish-like (such as Metriorhynchus); while the Triassic was represented by two primitive, still partially terrestrial groups: placodonts and nothosaurs.

Contrary to what many shows make to believe, dinosaurs, pterosaurs, Dimetrodon and sea reptiles were not the ancestors of any modern reptile; instead, some of them were at the origin of bird and mammal groups. However, there were true relatives of modern reptilian species in the past as well, and they have existed since the beginning of the Age of Dinosaurs or even before that time (except snakes, which are a rather young group evolutionarily speaking). Some of these animals were rather similar to their modern relatives, while other were quite different (remember that every animal group does evolve during the time). In general, most media and even documentaries will go with the larger species of each group. The smaller relatives are almost never mentioned because they are not spectacular enough, even though they were more abundant that their gigantic versions, just like what happens to modern animals in general.

A Whale of a Crocodile: Stomatosuchus

Crocs that pretended to be Mammals

Crocs of Oceania: the Mekosuchines

An Even More Enduring Success

Dinos are not Lizards...

The Reptiles of the Mammal Age

In this field terminology has changed recently. Traditionally archosaurs were divided into dinosaurs, pterosaurs, crocodiles and thecodonts

, but the last name has fallen out of fashion as paraphiletic

and is called by cladistics "artificial assemblage of basal archosaurs". Besides, only crown group (descendants of last common ancestor of birds and crocodiles, i.e. only living members) are called archosaurs, and others are Archosauriformes. Among thecodonts are the ancestors of crocs, dinos and pteros. Actually, some of them (Teratosaurus, Ornithosuchus, and others) were once believed true dinosaurs, precisely the very first large carnivorous dinosaurs, but most belong to the clade Pseudosuchia, today represented only by crocodilians. Basal archosaurs, often being somewhere between crocodylomorphs and dinosaurs, tend to get token appearances more in art and documentaries than anywhere else, and are rarely named.

Four-legged and Two-legged: The Rauisuchians

Crocs that pretended to be Dinos: The Poposaurs

The Ancestor of the Carnosaurs?: Teratosaurus

As was stated in previous folder, some traditional thecodonts are no more called archosaurs through nothing has really changed in beliefs about their phylogeny (with exception of phytosaurs). Here they are:

The First Runners: the Euparkeriids

The Crimson Crocs: the Erythrosuchids

Note that while recent evidence indicates that plesiosaurs, placodonts, and turtles may be basal archosauromorphs like them, they are still in separate folders just for differentiation.

Protruding Ribs, Flaps of Skin, and Pseudo-Wings: The "Gliding Lizards"

This section talks about both "mammal-like reptiles" (not actually reptiles in a cladistic sense), and their descendants the Mesozoic mammals. However, if you're searching only for Dimetrodon and nothing else, see Stock Dinosaurs (Non-Dinosaurs).

When Mammals were still hairless "lizards"

Carnivores, Omnivores, and Herbivores: The Dinocephalians

The Last Hunters before the Catastrophe: The Gorgonopsians

From Mole-like to Elephant-like: The Dicynodonts

The animal listed here were once called "cotylosaurs", but this word is now fallen in disuse. This was a catch-all term for all most primitive "reptiles" which couldn't be placed in another well-defined groups. However, some of them still make a natural grouping: Anapsids. They were a successful group of animals which make a group on their own, intermediate between true reptiles (the diapsids) and the mammal-like synapsids: hence their alternate name: parareptiles ("near reptiles"). Most anapsids were even more ancient than diapsids: they lived mainly in the Permian period

alongside Dimetrodon and the other mammal ancestors. Like therapsids, they were mainly discovered in Russia and South Africa. Whether turtles are just surviving anapsids or not has long been matter of discussion: today they're considered true diapsids, though still of uncertain placement in the tree (see “Extant reptile groups” above).

In The Coal Age