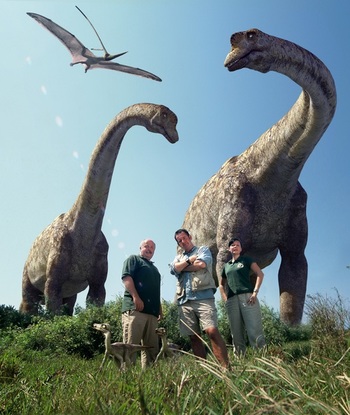 Extinction doesn't have to be forever...
There's something missing from our world
Opening Intro of each episode
Advertisement:

Prehistoric Park (2006) is a 6 episode Science Fiction Mockumentary Mini Series from ITV, created by the same company (Impossible Pictures Ltd.) that produced the famous Walking with Dinosaurs franchise, to which this show can either be seen as a Spiritual Successor or a Spin-Off. In turn, the hit Science Fiction series Primeval can be viewed as a very loose successor to Prehistoric Park.

The basic premise is simple: Real Life zoologist and adventurer Nigel Marven travels back in time to bring back various creatures from prehistoric eras, whom he and his team then place in the titular park. While episodic in nature, the series did have an overarching plot, as the issues of many animals took several episodes to resolve.

Although the show was filmed as if it told the story of a real park, it contained many obviously sci-fi inspired elements, such as the mysterious time portal, the workings of which were never explained.

The show is, in essence, similar to Discovery Channel's much less famous Dino Lab.

The video game Prehistoric Kingdom, although not directly based on the show, is something of a spiritual adaptation, with Nigel Marven as the narrator.