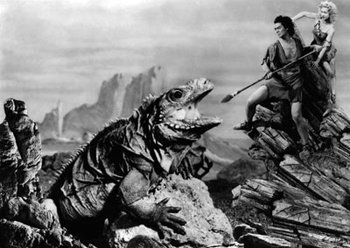 Making movies about giant monsters (often dinosaurs) is downright awesome. However, sometimes, the filmmakers just don't have the budget to make a somewhat convincing monster suit, or an animatronic puppet, or stop-motion, or, for newer movies, a crappily animated CGI monster.

But, all hope is not lost. No.... you can just take an ordinary lizard, alligator or other non-extinct reptile (or, very rarely, other smallish animal), stick it in a costume or glue on a few cardboard fins and horns, and... ta-da! Instant dinosaur!

Of course, having an Adventurer Palaeontologist pointing to an oversized iguana with horns glued to its head and calling it a "Brontosaurus" is just as convincing as it sounds, not to mention a complete and utter mockery of palaeontology. After all, if a five-year-old kid can tell the difference between a Tyrannosaurus rex and an iguana, it's highly unlikely anyone is going to be convinced that your cardboard-taped-to-his-back monitor lizard is supposed to be a dinosaur. Especially if they have any understanding of the Square-Cube Law.

Still, that's what makes these movies such cheesy fun. A good source of Nightmare Retardant, many fans suspect that these films' animal stars are the film-makers' pets. This has been a Discredited Trope since The '60s. A normal-sized but similarly nonthreatening movie animal is the Terrifying Pet Store Rat. A similar trope in which human actors are dressed as humanoid aliens is the Rubber-Forehead Alien, although it tends to be more convincing.

Given growing mainstream awareness that many dinosaurs had feathers (T. rex included), and that dinosaurs in general would be better described as big proto-birds than as big lizards (to the point where modern biologists actually differentiate between "avian dinosaurs" and "non-avian dinosaurs" rather than between birds and dinosaurs), it would be interesting to see a reconstruction/parody of this trope in the form of a Retraux or Genre Throwback work using a pigeon in a toothy mask in place of a T. rex.

Technically, dressing a horse up as a Unicorn should be this trope, although the lack of actual unicorns to compare them to means that it's usually given a pass. To a lesser extent, dressing dogs up as wolves or canine monsters like hellhounds or werewolves is also accepted since dogs are a domesticated wolf subspecies, and many dog breeds resemble their ancestors enough. Really, examples where mammals are dressed up do fare a bit better in believability then the reptilian kind.