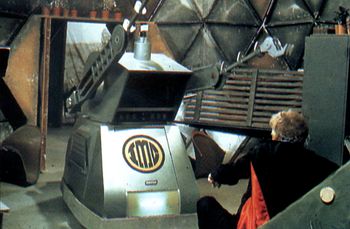 Marvel as the Third Doctor fights ED-209's weird cousin!
All colonists are eccentric. That's why they're colonists.
— Captain Dent
Advertisement:

The one with the funky foetus.

Written by Malcolm Hulke. This six-episode serial first aired from April 10 to May 15, 1971.

The Master is at it again - this time he's stolen the Time Lords' files on The Doomsday Weapon, and they decide to let the Doctor off his leash a bit so that he can go and retrieve the files for them. The Doctor ends up on the desolate planet of Uxaerius, in the year 2472, where a small colony and an orbiting ship from the Intergalactic Mining Corporation are arguing about who owns the planet. Meanwhile the primitive natives are worshipping a strange machine guarded by a fearsome creature.

The Master shows up, posing as an Earth Adjudicator there to decide the fate of the planet. He forces the Doctor to take him to the Primitives' underground city, and it transpires that the strange machine is, inevitably, the Doomsday Weapon itself. Capable of destroying whole planets when activated, even when dormant its radiation has killed most of the race of the machine's guardian, as well as causing the colonists' crops to fail.

The Doctor persuades the last Guardian to destroy the machine rather than let the Master get his hands on it, and the Doctor and Master get away just as it explodes. The Master escapes in his TARDIS while the Doctor is sent back to Earth in his literally one second after the Brigadier demanded that he'd return.

This was the first time the Doctor went to an alien planet since "The Krotons", three whole years earlier.